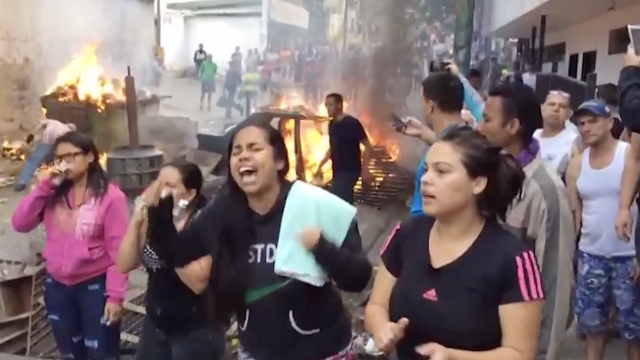 Violent protests erupted in Venezuela's capital Monday after some members of the armed forces staged an uprising against the government of President Nicolás Maduro.

According to Venezuela's defense ministry, a "small group" of national guardsmen stole a cache of weapons and kidnapped four officers from a national guard command post early Monday morning before moving to a different command post, where they were stopped. Videos posted by the group on social media hours prior called for President Maduro's removal from office and urged Venezuelans to take to the streets to show support for their rebellion.

Residents of a neighborhood nearby began protesting Maduro's presidency shortly after the guardsmen were arrested, but they were dispersed by security forces with tear gas.

A few hours later, the country's Supreme Court, which is made up of Maduro loyalists, ruled Venezuela's opposition-controlled National Assembly is invalid.

The U.S. and several other countries say Maduro won re-election fraudulently and that he's a dictator who has led Venezuela into an economic crisis. Guaidó said he was willing to take over the presidency temporarily, as Venezuela's constitution allows a presidential vacancy to be filled by the president of the National Assembly.