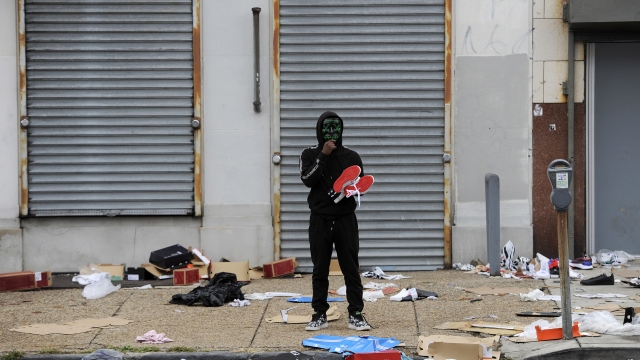 30 officers were injured in violent protests sparked by the fatal shooting of a Black man allegedly waving a knife.

Walter Wallace Jr., a 27-year-old Black man, was shot and killed by two Philadelphia police officers Monday. It was all caught on camera, and we want to warn you the footage you are about to see may be difficult to watch.

Police say Wallace was carrying a knife and walking toward the officers when they opened fire. The video, which was taken by a bystander on the scene, shows Wallace's mother chasing after her son before the shooting and then rushing over to him after shots were fired. Police drove Wallace to the hospital where he was pronounced dead.

Philadelphia Mayor Jim Kenney says the shooting is under investigation and that he looks forward to a "speedy and transparent resolution." The local police union has called for patience and says the officers involved are being "vilified" for "doing their job."

Civil rights attorney Ben Crump tweeted out the video of the shooting saying "cops made NO attempts at de-escalating the situation."

Protests erupted in Philadelphia overnight, as crowds took to the streets following the shooting in the city's Cobbs Creek neighborhood.

According to the city's police department, 30 officers were injured and law enforcement vehicles were damaged, some set on fire. Businesses including a Family Dollar store reported lootings. Dozens of people were arrested.

Philadelphia saw similar protests and unrest back in May following the death of George Floyd in Minneapolis.