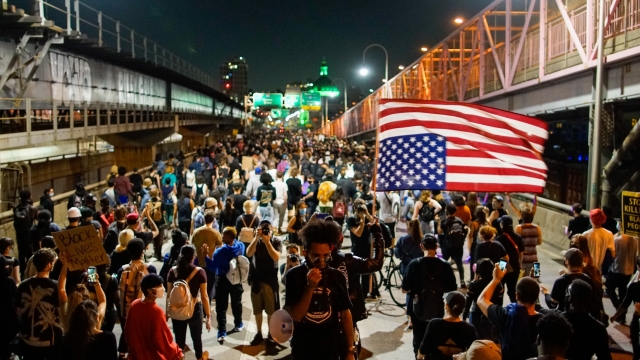 Protests erupted across the country Wednesday night after a grand jury announced wanton endangerment charges for one officer involved in Breonna Taylor's death.

Two Louisville, Kentucky, police officers were shot and injured during protests. The department's chief said the officers were being treated for non-life threatening injuries and one suspect was in custody. The FBI in Louisville is asking for the public's help in identifying those who were involved in the shooting.

Seattle Police arrested over a dozen people overnight amid ongoing protests, declaring them an unlawful assembly early Thursday morning after multiple fires were set, explosives were thrown at officers and property in the surrounding area was damaged.

Police in Portland, Oregon, declared an unlawful assembly and then a riot. Video from the scene shows a Molotov cocktail being thrown at police officers and damage to one police precinct.

During a briefing at the White House, President Trump praised Kentucky Attorney General Daniel Cameron as "a star."

"I have.... really brilliant Kentucky Attorney General, Daniel Cameron is doing a fantastic job. I think he's a star."

The president repeated Cameron's statement that "justice is not often easy."

"One thing I want to make clear: protesting makes a lot of sense. It's clear people should be able to speak. But no violence. No violence. My heart goes out to Breonna Taylor's mom. The last thing she needs is to see violence in the streets, so protest peacefully, no violence."