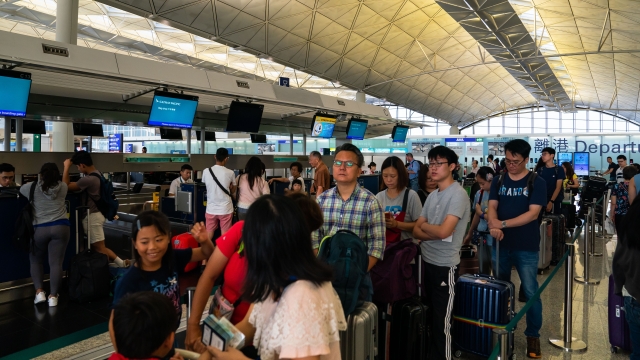 By Tuesday afternoon local time, Hong Kong's Airport Authority said the protest had once again "seriously disrupted" airport operations. Because of this, it canceled all remaining outbound flights for the day.

This comes one day after the airport canceled more than 100 flights. Demonstrators had gathered at the airport to protest against police who violently clashed with activists in several districts Sunday night. During those altercations, police were caught on video firing tear gas at close range inside multiple subway stations.

Police also fired non-lethal projectiles into crowds — reportedly hitting one woman in the eye. In response, some protesters at the airport wore bandages over their eyes.

Even before the airport suspended check-ins on Tuesday, hundreds of the day's flights had been canceled because of rescheduling issues.

Hong Kong's transportation secretary said it's rare for airport operations to be suspended. He said — in the 21 years the airport has been operating — he only remembers it shutting down for "reasons of typhoon" and "a collision of a vessel with the bridge."

In a press conference earlier in the day, leader Carrie Lam defended police against allegations of excessive force over the weekend, saying 10 consecutive weeks of protests have "pushed Hong Kong to the brink of no return."