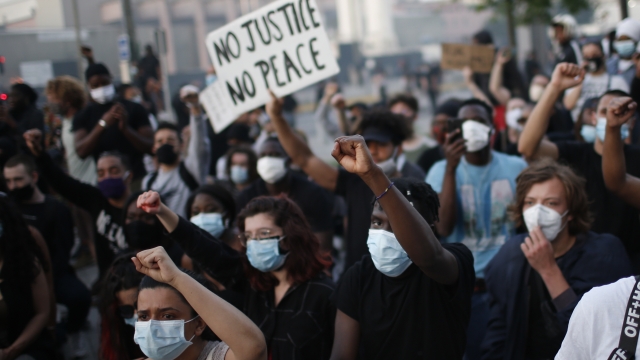 SMS
Protests Break Out In Paris Over Report On A 2016 Deadly Arrest
By Meg Hilling
By Meg Hilling
June 3, 2020
The deaths of George Floyd and Adama Traoré led to protests in Paris.
SHOW TRANSCRIPT

Protesters in Paris clashed with law enforcement Tuesday in response to the death of George Floyd and the release of a report on a similar deadly arrest in France.

In 2016, Adama Traoré died after being detained by French law enforcement following a dispute over an identity check and a 15-minute chase. One of three of the arresting officers told investigators at the time that they pinned Traoré down with their combined bodyweight.

Those officers were exonerated last week after medical experts found Traoré died of heart failure, possibly from an underlying condition. That official report counters an independent medical report commissioned by Traoré’s family that found he died of asphyxiation.

Thousands of protesters packed the streets in Paris calling for an end to police brutality, despite protests being banned because of coronavirus restrictions.

Police used tear gas to disperse protesters after tensions rose and fires began to break out.