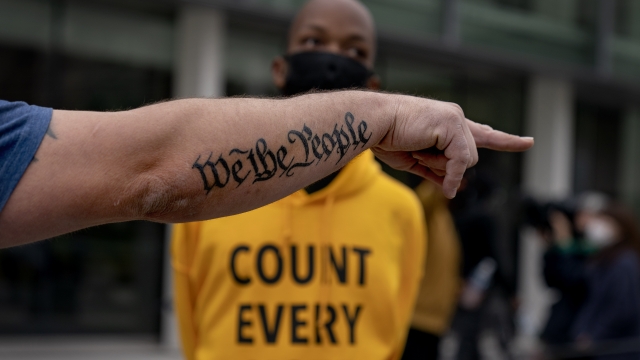 Facebook has blocked a new group with hundreds of thousands of followers who believe the election is being stolen.

These unconfirmed claims are flooding social media — and inciting protests at counting centers in swing states.

"There's no truth at all to any accusations from this group or others that every ballot is not being counted," Fields Moseley, communications director of Maricopa County, tells Newsy.

The Maricopa County Board of Supervisors issued a letter out of concern that misinformation was spreading, saying “vote counting is not a Republican or Democrat issue.”

"They're counting every ballot. Those that there are question marks on, they have a process called adjudication that they go through where they determine voter intent with a bipartisan group.

Authorities also had to quell “SharpieGate” — fears that ballots were being invalidated because of the pens used to fill them out. But the Maricopa County government site explains Sharpie ink works better with their vote tabulating equipment.

"We do believe that this misinformation and disinformation is upping the intensity of the reaction of this group of people and resulting in the sorts of events that we're seeing around these polling locations," says Mike Caulfield, director of blended and networked learning at Washington State University Vancouver.

"I think the folks who are supporters of President Trump are looking for explanations that make sense about how it could be so close when they expected such a massive victory," says Nina Jankowicz, the disinformation fellow at The Wilson Center and author of “How To Lose The Information War.”

After the president’s campaign announced it was suing Michigan for not providing “meaningful” access to counting centers — a lawsuit that was later dismissed — protesters demanded election workers in Detroit stop the count.

Many election fraud claims have been gathering under the hashtag StopTheSteal. It follows months of remarks from the President alleging —  without evidence — that the election would be rigged. Researchers now say these allegations are being spread by prominent supporters, including former acting Director of National Intelligence Richard Grenell.

"Every great civilization has lasted roughly 250 years. We’re one generation away from losing all of our freedoms. You have to get active and fight," Grenell said in a fundraising video in September.

The Facebook group that was recently taken down had amassed more than 300,000 members. Followers were planning multiple events for the days ahead.