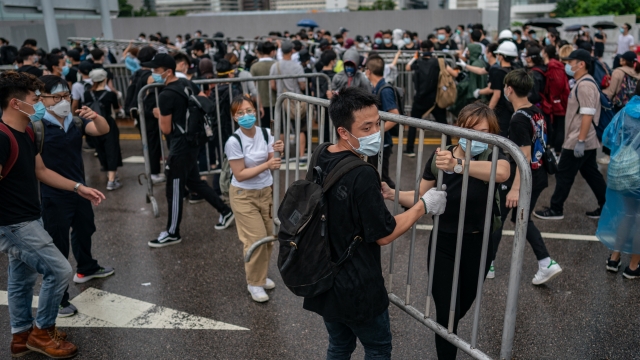 They're protesting against proposed extradition legislation that would allow China to extradite suspects from Hong Kong. The bill does not guarantee a fair trial.

Hong Kong operates under different systems than the mainland. That's because Hong Kong was guaranteed its own social, legal and political framework for at least 50 years when the former British colony was handed back over to China in 1997.

Hong Kong's chief secretary said the extradition bill "only targets those fugitives who committed serious crimes." But critics say the legislation could be used to target political enemies and would undermine the city's semi-autonomous legal system.

Protests outside Hong Kong's government complex have been mostly peaceful up until Wednesday, when protesters clashed with police — storming barricades and reportedly hurling traffic cones, umbrellas and even bricks at officers.

In a video statement posted on Twitter, a Hong Kong police officer  noted the change in protesters' behavior and asked them to leave the area as soon as possible.

Hong Kong lawmakers were scheduled to debate the extradition bill earlier Wednesday, but that session was postponed due to the demonstration. The final vote on the bill was slated for June 20, but it's unclear if that date will now be pushed back because of the debate delay.