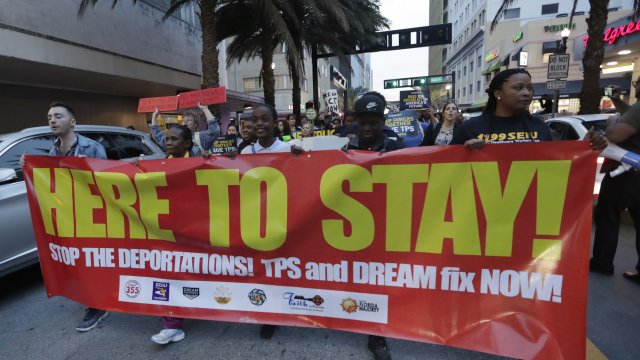 SMS
Immigrants With Protected Status Sue To Restore Path To Green Cards
By Ben Schamisso
By Ben Schamisso
September 9, 2020
Immigrants who've been in the U.S. for 20 years challenge a little-known Trump administration policy change that makes them vulnerable to deportation.
SHOW TRANSCRIPT

"What if I do get sent back? I don't really know the country like that."

Haitian-born Heroldine Bazile has been living in the U.S. since she was eight months old. But she could soon face deportation because of a little-known policy change by the Trump administration that's being challenged in a new lawsuit.

"I don't know Haiti. I came here as a baby, I never went back there, never visited. And then my family is already down here," said Bazile who's now 23 and who's a plaintiff.

Nealy 10 years ago, she obtained Temporary Protected Status or TPS — a deportation relief for people already in the U.S. whose countries are affected by armed conflict or natural disaster.

"It actually helps a lot because I'm able to work, able to go to school" said Bazile.

It came years after she and her mother were denied asylum and a judge ordered them deported. Bazile stayed and grew up in the U.S.

Previously, immigrants with TPS were able to void their old deportation orders by leaving the U.S. with government permission. Upon their return, they had a clean sheet, allowing them to seek permanent residency.

In the new lawsuit, advocates say the policy change is "unlawful" and leaves tens of thousands of TPS recipients in an impossible limbo while the government fights in court to end their protections.

"If the injunction were to lift, these folks would now be really stuck between a rock and a hard place, unable to move to a more permanent immigration status. And their temporary status will essentially have vanished."

The Trump administration argues that previous Green Card pathways for TPS recipients were "a mistaken distortion of what Congress intended when creating this temporary program."

Over the past few years, the administration tried to phase out the protection for hundreds of thousands of immigrants from Haiti, El Salvador, Honduras, Nicaragua, Sudan and Nepal, saying the conditions in these countries improved enough over the years for them to safely return home.

But federal courts barred the terminations, for now, while appeals are pending.