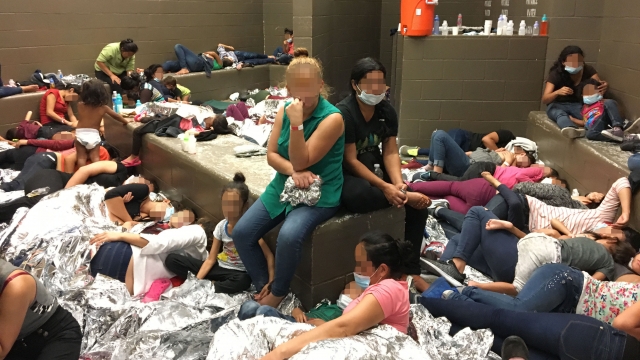 Footage published on Thursday by ProPublica shows the hours leading up to the death of a 16-year-old from Guatemala in U.S. Border Patrol custody.

Carlos Gregorio Hernandez Vasquez was found dead on May 20 at a holding facility in Weslaco, Texas. He had been there for six days even though children are supposed to be transferred within 72 hours. On May 19, he reportedly had 103 degree fever and was seriously ill. He was put in a cell with another sick boy, and a nurse said he should be checked in two hours and taken to the ER if he got worse.

ProPublica obtained footage from local police who investigated Carlos' death and compared the footage to Border Patrol logs from the night he died. Those documents say agents found Carlos unresponsive during a morning welfare check, but the footage seems to show that's not what happened.

The video appears to show Carlos twisting and moving uncomfortably for at least 25 minutes, starting at about 1:20 a.m. He goes to the window and falls on the floor. He later gets up to go to the toilet and collapses again. The video ends at 1:47 a.m.

The video footage resumes at 5:48 a.m., four hours after the first video ended, and shows Carlos in the same position. After about 15 minutes, his cell mate wakes up, finds Carlos unresponsive and waves at agents through the window. Officials enter the cell a few minutes later.

An autopsy found Carlos died of the flu, complicated by other infections. He was the sixth migrant child to die in U.S. custody within the past year. John Sanders, who was Customs and Border Protection's commissioner at the time, resigned soon after. He has since blamed the government and himself for what he called predictable, preventable tragedies like Carlos'.

A CBP spokesman told ProPublica: "While we cannot discuss specific information or details of this investigation, we can tell you that the Department of Homeland Security and this agency are looking into all aspects of this case to ensure all procedures were followed."