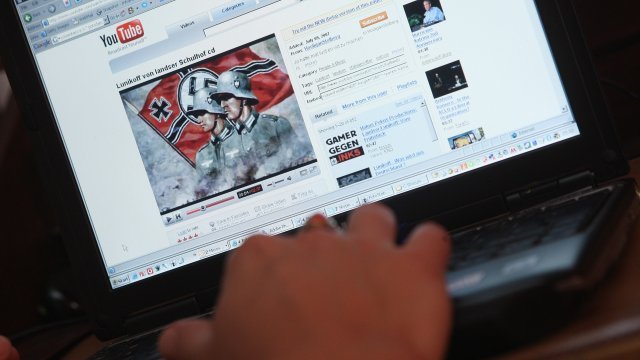 After the deadly clashes in Charlottesville, the self-described "alt-right" has been busy spreading its white nationalist movement online. And researchers say it's getting a boost from Russian bots.

"We started out by looking at the messaging we were seeing coming out of the 'alt-right' about Charlottesville," said Ben Nimmo of the Digital Forensic Research Lab at the Atlantic Council. Nimmo tracks Russian bots and trolls online and noticed something strange.

"Apparently, U.S.-based 'alt-right' commentators were comparing the events in Charlottesville to what they saw as the Nazi regime in Kiev in Ukraine. And they were arguing that mainstream U.S. politicians who were condemning the neo-Nazis in Charlottesville were being hypocritical because they were the same politicians who were supporting neo-Nazis in Ukraine," he said.

Nimmo said coordination by the "alt-right" often starts in places like 4chan, Reddit, Gab — the fringes of social media — and they discuss how they're then going to launch a campaign on Facebook or Twitter.

During the election and now, botnets help boost fringe or distorted messaging. They're automated accounts that pose as real people. A medium-sized botnet has 10,000 accounts. They can coordinate to make a topic or hashtag trend on social media, shaping and distorting online chatter.

"If they make the hashtag trend, then people that don't follow them will also see it, and so the hope is that it will suck other people into the discussion," Nimmo said.

Their most recent shared enemy: The so-called "alt-left." Online activity shows both aiming to portray the group as just as guilty — or worse — than the white nationalists who stormed Charlottesville.