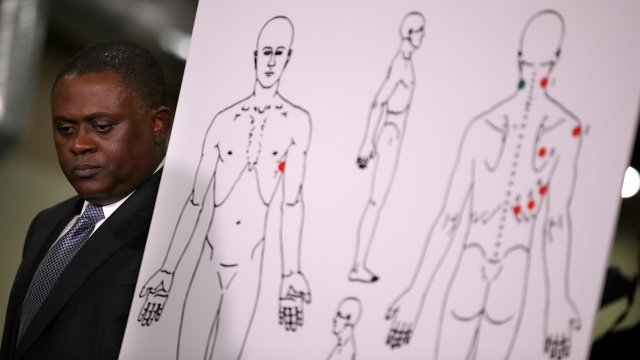 SMS
Private Autopsy Shows Stephon Clark Was Shot From Behind Several Times
By Jake Jones
By Jake Jones
March 30, 2018
The officers who fired shots at Clark said they thought a cellphone in his hand was a gun.
SHOW TRANSCRIPT

A private autopsy commissioned by the family of Stephon Clark claims the unarmed 22-year-old was shot multiple times from behind.

Police fired about 20 bullets at Clark, a black man, who was in the backyard of his grandmother's home in Sacramento, California. Police said they thought a cellphone in his hand was a gun.

"The proposition that has been presented that he was assailing the officers, meaning he was facing the officers, is inconsistent with the prevailing forensic evidence, as documented at autopsy," said forensic pathologist Dr. Bennet Omalu.

The city has not yet released the results of the separate, official autopsy, only revealing Clark died from multiple gunshot wounds. The private autopsy revealed Clark had eight gunshot wounds total: four in the lower back, two in the neck, one in the armpit and one in the leg. The doctor concluded seven of the shots had a "fatal capacity."

The two officers involved in the shooting have come under intense scrutiny for responding with deadly force to a call about a person allegedly breaking car windows. The officers' body camera microphones were shut off after the shooting.