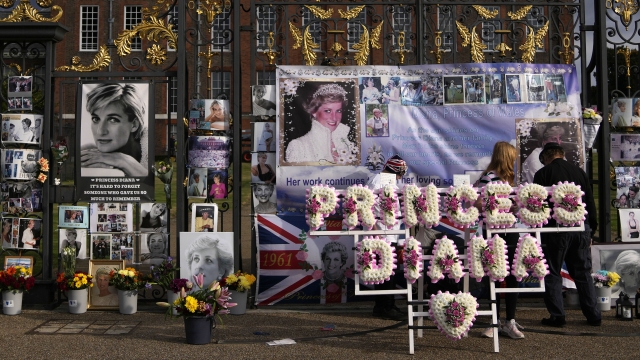 SMS
Princess Diana's Global Impact 25 Years After Her Death
By Luke Hanrahan
By Luke Hanrahan
August 31, 2022
A young woman who positively altered the public's perception of the royal family and made a lasting impact on the world is remembered 25 years later.

Capturing imaginations from the very beginning, Diana — then an innocent 20-year-old but marrying the future king — would transform her life.

While the princess hated the intrusion, she quickly learned the media was also a tool she could use to bring attention to a cause.

Before she met Prince Charles, Princess Diana lived in a three-bedroom apartment in South Kensington. She had "chief chick" written above her bedroom door. She was an archetypal small-town girl from the English countryside who would come and go in a Mini Metro car. People remember her as a typical girl next door. It's difficult to believe how Princess Diana would go on to impact not just British society, but further afield too.

"I think the one that sticks to memory is the walking amongst the mines ... I can still see that very clearly today," Diana's former neighbor John Fultner said. "It was quite an emotional time. It was quite significant."

Whether it was stepping out onto an active minefield to aid in the call for an international ban on land mines, or highlighting poverty alongside Mother Teresa, Diana made a positive impact on the contemporary issues of her day.

Raymond Kyle is a former neighbor who, like many, has his own personal and long-lasting memories of Diana.

"I think the AIDS thing, there was a real stigma and Princess Diana went out to shake hands with them. And that really, I think, did help," he said.

She was a woman who became not just a mother but an international style icon who made a difference to millions.

Her death 25 years ago on Aug. 31 shook the world: a car crash in Paris, precipitated by a paparazzi chase.

"I admired and respected her for her energy and commitment to others and, especially, for her devotion to her two boys," Queen Elizabeth II said during Diana's funeral.

Diana's sons, Prince William and Prince Harry, have similarly learned to harness the power of the media to shine a light on just causes.

"The monarchy, having witnessed a sharp decrease in its popularity in the aftermath of Diana's death, basically looks to these boys as the saviors of the institution and the entire, if you like, front of the institution is remodeled around their ambitions as two young royals," royal historian Ed Owens said. "So the reason she matters is because she transformed the institution during her lifetime. But in terms of her legacy, she's continued to transform the institution through the figures of her two sons."

Diana was a young woman who positively altered the public's perception of the royal family and made a lasting impact on the world — a legacy her sons continue to honor and maintain.