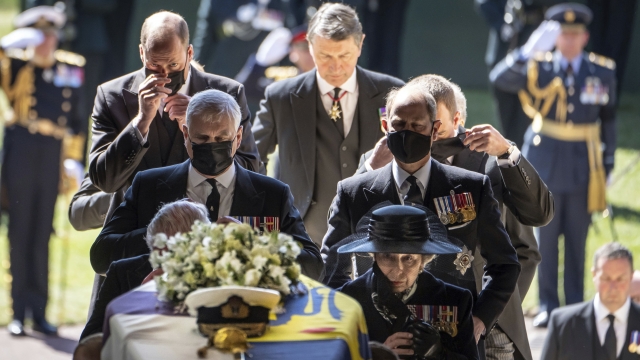 "May thy portion this day be in peace, and thy dwelling in the heavenly Jerusalem. Amen."

Prince Philip was laid to rest Saturday, surrounded by the Royal Family and 30 guests who gathered to honor his lifetime of service to the U.K. and his family.

Queen Elizabeth II, his wife of 73 years, sat alone at the ceremony with her head bowed in prayer.

Prince Charles, the heir to the throne, sat opposite the monarch - and next to his wife, Camilla. Prince Andrew sat to the queen's left. Also present were Prince William and his wife Kate - seated opposite Prince Harry, who came from California without his pregnant wife, Meghan. It marked first reunion of the brothers since Prince Harry left the Royal Family more than a year ago.

U.K. residents observed one minute of silence in Philip's honor before the funeral began. Restrictions due to the pandemic meant the planned guest list of 800 mourners was significantly pared down for social distancing.

His coffin arrived at the chapel in a Land Rover he specially designed himself. Senior military commanders lined up before the car, The queen rode in a Bentley, with grandsons William and Harry walking behind the hearse with their cousin Peter Phillips.

The ceremony had no sermon, at Philip's request nor family eulogies or readings to keep with royal tradition. The funeral reflected on Philip's almost 14 years in the Royal Navy and was sprinkled with tributes to his engaging personality.

He was laid in a vault alongside the remains of 24 other royals, but is expected to be later interred in the Royal Burial Ground near Windsor Castle - with the queen joining him after her death.