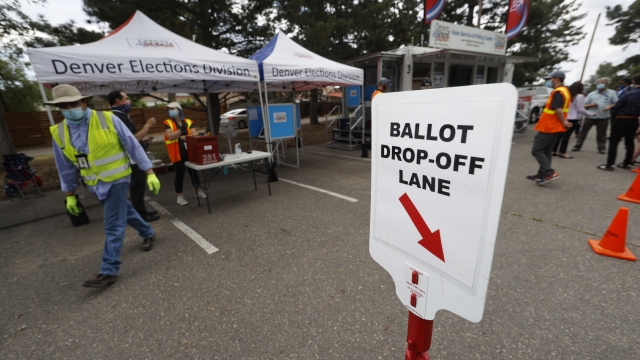 One of the year's most high-profile Senate races is now set after former Gov. John Hickenlooper won Colorado's Democratic Senate primary on Tuesday.

In November, he'll face incumbent Sen. Cory Gardner, who was unopposed in the Republican primary.

Also on Tuesday, Republicans were dealt an upset in the race for the House seat in Colorado's 3rd District. Incumbent Rep. Scott Tipton lost his primary to far-right candidate Lauren Boebert. Tipton was running for his sixth term, and President Trump tweeted his endorsement of him the day before the election.

Tipton's loss marks the third 2020 primary upset for President Trump's endorsement record. He previously endorsed Rep. Denver Riggleman, who lost his Republican primary during Virginia's state convention. And President Trump supported Lynda Bennett in the GOP primary for the 11th District House seat in North Carolina. She lost to Madison Cawthorn, who has said his win is not a referendum on the president. Outside of those three races, the president's endorsement record was undefeated this election cycle.

In Oklahoma, Sen. Jim Inhofe easily beat his Republican primary challengers. His biggest challenge in November will come from 30-year-old Democratic primary winner Abby Broyles. Voters in the Sooner State also approved a ballot question requiring the expansion of Medicaid and adding it to the state constitution.

In Utah, the winner of the Republican race for governor is still unknown, as election officials have three weeks to count ballots. Former Utah Gov. Jon Huntsman is running to get his job back, but it's unclear if he'll have enough support to win the primary. His biggest competitor is the state's current Lt. Gov. Spencer Cox.