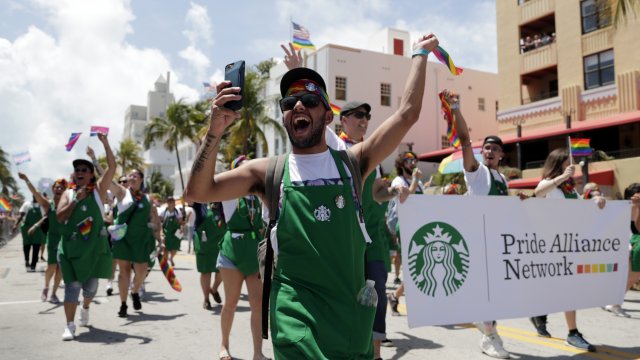 Chances are, you’ve seen the memes already, poking fun at major corporations cashing in on Pride.

By June 1st, the rainbow flag was everywhere. Part of that is due to growing acceptance of the LGBTQ community. I reached out to the Capital Pride Alliance to hear about the reaction.

“I've sensed very much genuine interest to do more and to do better and to be advocates for us," said Ryan Bos, executive director of the Capital Pride Alliance.

But the flip side has more to do with the bottom line, according to one consumer expert.

“When you look at the Pride community, it actually represents about $3.7 trillion of spending power," said Lisa Miller, founder of Lisa W. Miller & Associates.

In one way, it’s a win-win. The community gets more visibility, and businesses get to advertise.

“Acceptance for a minoritized group happens in any number of ways, and one of those ways is actually part and parcel to sort of consumerism," said Michael Bronski, professor of the Practice in Media and Advertising at Harvard University and author of A Queer History of the United States of Young People.

The financial incentives of having a float in the parade are clear, but so is the “pinkwashing.” That’s a term advocates use to describe marketing tactics that appear to be supportive, but are really only motivated by profits. Hence all those sarcastic memes. That’s why it’s important for businesses who sponsor Pride events to demonstrate that they’re fully invested, by donating to nonprofits or committing to inclusive work environments.

“Your engagement and support can't just start and stop with that check," Bos said.

But, experts point out that corporate involvement in politics is nothing new. We saw similar efforts during the Black Lives Matter protests last year, as well as in the leadup to the presidential election.