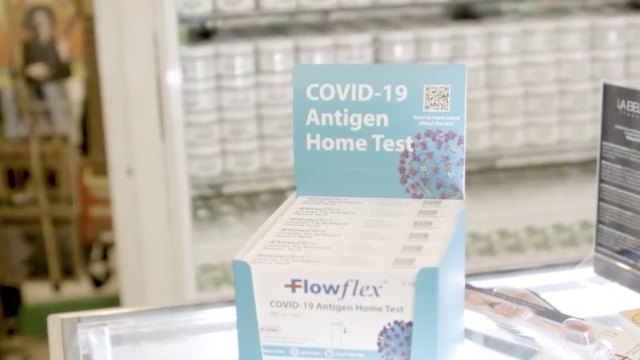 SMS
Some Distributors Are Price Gouging COVID-19 Rapid Tests
By Alexandra Miller
By Alexandra Miller
January 21, 2022
The owners of Thompson Chemists are not doing business with those companies because of how much they'd have to charge customers to make a profit.

Gary and Jolie Alony have kept the doors open to their pharmacy for nearly 30 years. But the last few years — and especially the last few months — have really kept them on their toes.

The Alony's pharmacy was one of the few places that had tests on hand and for a low price. They purchased them for seven dollars from a wholesale distributor and sold them for $10 each.

But those wholesale prices have not held. Some distributors are asking small businesses to fork over a hefty price for these rapid tests.

One distributor doubled the price of a test and another more than tripled the price. Some are charging nearly $30 for one single test.

"It's beyond my imagination that a health care provider should be doing — any anybody associated with health care during a crisis — should be doing anything like that," Gary said. "I just see the prices and I don't understand how it went from $7 to $23."

The Alonys are choosing not to do business with those companies because of how much they'd have to charge a customer to make a profit. They found another distributor and will pay slightly more. It'll be nine dollars per test for the next batch. So for now, they're trying to conserve the tests.

"In order for us to serve the community best, which is really what we wanted to do, we decided to limit it to one per person per day, which we felt was the best way to serve the neighborhood," Gary said.

Unfortunately, they're no stranger to these issues. They experienced some serious price gouging at the beginning of the pandemic.

"You know, there were bad eggs everywhere," Gary said. "We purchased Lysol wipes for $14 and we were selling them for anywhere  from $18 to $20."

Gary hopes that as Omicron is on a down swing and now that customers can be reimbursed by insurance companies for up to a $12 test under a new Biden administration rule, distributors might change how they handle the sale of the tests.

"It'll be interesting to see if all of a sudden they drop their price. Just because they can't possibly make a sale anymore. If nobody's going to be paying $30 for the test," Gary said.

Newsy reached out to each of these distributors for comment and to schedule an interview but each declined or did not respond.