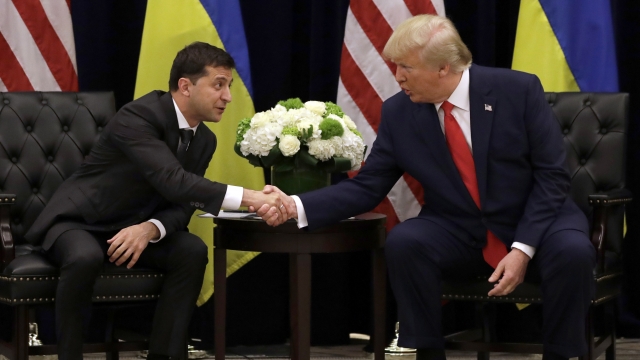 The world is impressed, inspired and some people on the internet are swooning for Ukrainian President Volodymyr Zelenskyy.

But the former comedian, actor and Dancing with the Stars winner was part of our national conversation long before the last couple of weeks. Former President Donald Trump's now infamous call with Zelenskyy led to his first impeachment in 2019. Trump pressured Ukraine's newly elected president for dirt on then-candidate Joe Biden and his son Hunter and appeared to threaten to withhold military aid until he got it.

Yes — the same kind of military aid Ukrainians are using now to fight off the Russians.

Zelenskyy never gave Trump what he wanted and maintains he did not feel pressured during the call.

It was a tough blow to the Democrats' case at the time and something Trump still talks about today.

Now, the history between the two presidents is coming to a head just about two years later. Trump is praising the Ukrainian leader, calling him "a brave man."

Zelenskyy staying above the fray then showed just how much Ukrainians needed America's support — regardless of party. The javelins he told Trump he wanted to buy 3 years ago are the same weapons he needs to fight off Putin today.