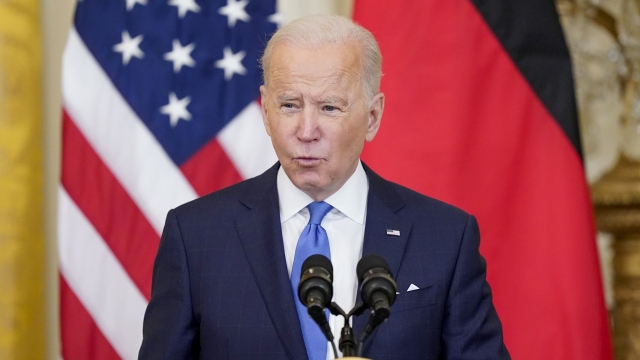 In a flurry of diplomacy across two continents, President Joe Biden emerged from a meeting with Germany's new leader Monday vowing the crucial Nord Stream 2 Russia-to-Germany gas pipeline would be blocked if Russia further invades Ukraine. Russia's Vladimir Putin said the U.S. and its allies were the only ones talking about invasion.

Putin and French President Emmanuel Macron met for hours in Moscow at the same time President Biden and German Chancellor Olaf Scholz spoke at the White House in efforts to defuse the crisis before armed conflict breaks out. Russia has massed thousands of troops at the Ukraine border, adding military might almost daily.

The White House has expressed increasing alarm about the prospects of a war, and President Biden has been looking to solidify support among European allies for economy-jarring sanctions against Russia if it moves further with an invasion.

"We are jointly ready, and all of NATO is ready," President Biden said, referring to the powerful Western alliance, though Ukraine is not a member.

While President Biden reiterated with certitude that the pipeline would not move forward, Scholz stressed the need to keep some ambiguity about sanctions in order to press Russia to de-escalate the crisis.

"It's necessary for Russia to understand that a lot more could happen than they've perhaps calculated with themselves,." Scholz said.

The buildup of over 100,000 Russian troops near Ukraine has fueled Western worries of a possible offensive. White House national security adviser Jake Sullivan warned Sunday that Russia could invade Ukraine "any day," triggering a conflict that would come at an "enormous human cost."

Putin described his lengthy talks with Macron at the Kremlin as businesslike. He noted that the U.S. and its NATO allies have ignored Moscow's demands for security guarantees.

He said that NATO's expansion eastward to Russia's border has violated the security principles of international agreements and scoffed at Western assurances that it is a defensive alliance that doesn't threaten Russia.

"People of Iraq, Libya and Afghanistan have had learned it from their own experience," the Russian leader said in a sarcastic reference to the U.S. allies' involvement in military campaigns in those countries. He also referenced NATO's 1999 bombing campaign in the former Yugoslavia.

He derided the Western criticism of the Russian military buildup near Ukraine, saying that "NATO members consider it possible to lecture us about our troops movements on our own territory and cast them as a threat of Russian invasion in Ukraine."

Russia has denied any plans to attack its neighbor but demands that the U.S. and its allies bar Ukraine and other former Soviet nations from joining NATO, halt weapons deployments there and roll back NATO forces from Eastern Europe. Washington and NATO reject those demands.

Unswayed, President Biden on Monday said "it would be wise" for Americans other than essential diplomats to leave Ukraine amid the Russian military threat.

On a positive note, Putin said without elaboration that some of Macron's proposals could serve as a basis for a settlement of the conflict in eastern Ukraine, adding that they agreed to have a call after Macron's visit to Kyiv Tuesday.

Likewise, President Biden said when asked if there remained an "offramp" for Russia in the standoff: "The answer is yes."

Macron said after his "substantial, deep" meeting with Putin: "The upcoming days will be crucial and deep discussions together will be needed ... to build new guarantees for peace and security" for the European continent.

Macron and Putin spent several hours in a meeting with a meal that included fish soup, the choice of sturgeon or reindeer with sweet potatoes and pear pie with vanilla ice cream.

Macron, who heads Tuesday to Ukraine, spoke by phone Sunday with President Biden. Before the Putin meeting, Macron said: "I don't believe in spontaneous miracles."

"The security and sovereignty of Ukraine or any other European state cannot be a subject for compromise, while it is also legitimate for Russia to pose the question of its own security," Macron told the French newspaper Journal du Dimanche.

The State Department has been warning American citizens to reconsider any plans to travel to Ukraine since last year due to the buildup of Russian forces near the border. In January, it upgraded that advice, urging U.S. citizens not to travel to Ukraine or to leave the country if they are already there. That stepped-up warning came as the department ordered the families of all American staffers at the U.S. embassy in Kyiv to depart and allowed non-essential diplomats there leave

Before meeting President Biden, Scholz told German media that "there will be a very high price if Ukraine is attacked militarily. And we are preparing for this very precisely and have been talking about the details for a long time." Scholz will travel to Kyiv and Moscow Feb. 14-15.

Separately German Defense Minister Christine Lambrecht said her country would add up to 350 troops within a few days to about 500 already a part of a NATO battlegroup in Lithuania. "With this, we are strengthening our contribution to forces on NATO's eastern flank and sending a very clear signal of unity to our allies," she said.

President Biden already has deployed additional U.S. troops to Poland, Romania and Germany, and a few dozen elite U.S troops and equipment landed Sunday in southeastern Poland near the border with Ukraine, with hundreds more infantry troops of the 82nd Airborne Division set to arrive.

At a news conference in Washington, U.S. Secretary of State Antony Blinken and EU foreign policy chief Josep Borrell said the U.S. and Europe defended the increasingly dire Western warnings that a Russian invasion may be imminent.

"This is not alarmism. This is simply the facts," Blinken said. "And the facts are that we've seen over the last few months a massive amassing of Russian forces on Ukraine's borders."

"We are considering more longer-term adjustments to our posture, our presence in the eastern part of the alliance," Stoltenberg said after talks in Brussels with Polish President Andrzej Duda. "If Russia really wants less NATO close to the borders, they get the opposite."

Stoltenberg gave no details and said no final decision has been made, but the move could mirror NATO's long-term military presence in Estonia, Latvia, Lithuania and Poland, where about 5,000 troops are stationed. It would see a similar force based in Bulgaria, Romania, Hungary and Slovakia.

That would mean NATO troops stationed long-term near Ukraine's western border and in the Black Sea area. The aim would be only to bolster the defenses of NATO allies in the region and the troops would not cross into Ukraine should Russia invade.

In 2015, France and Germany helped broker a peace deal for eastern Ukraine in a bid to end the conflict between Ukrainian forces and Russia-backed separatists that erupted the previous year following the Russian annexation of Ukraine's Crimean Peninsula.