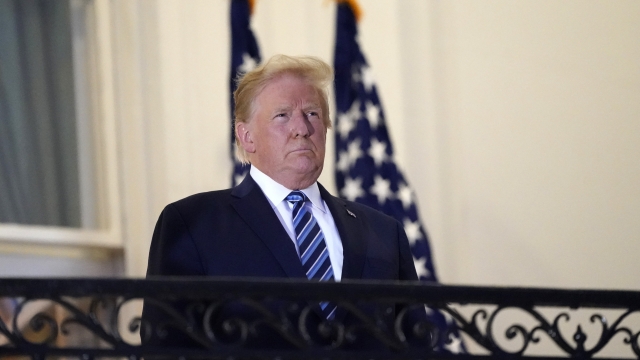 Lauren Magarino: "The president said he would probably get tested again for COVID-19 today, and we still don't know when his last negative test was. How is the campaign justifying in-person events?"

Stephanie Liebergen: "Well, the president says he's feeling good as well, just for yourselves. And his doctor, Dr Sean Conley put out a statement yesterday saying that it's okay for the president to return to public engagements as soon as Saturday. That marks 10 days since the president's first positive coronavirus test, which does follow along the CDC guidelines. Now. The White House has not disclosed the last time the president has tested negative, and they're being pressed by members of the media every day for that information. And the question continually is dodged. Now, as for the campaign, the Pence family on by the vice president, excuse me and the Trump family are still proceeding with events, and they have to go ahead this weekend. Now the president wants to get back to the rallies himself. Um, it's interesting that you mentioned Florida as vice president. Mike Pence is already scheduled to hold some events in Florida this weekend. Also, people have their eyes out on Oct. 15, next week, when the Miami debate was originally scheduled. That all of that is now up in flocks."

Magarino: "Absolutely. Some members of the president's own party said they don't feel comfortable with how seriously the White House is taking the outbreak. Who said what? Can you fill us in with the receipts?"

Liebergen: "Basically right. So it was Senate Majority Leader Mitch McConnell made a statement yesterday while he was campaigning in Kentucky. He said he stopped going to the White House two months ago because he disagreed with the coronavirus protocols at the White House was putting in place. Now, in a statement, he said, 'My impression was their approach to how to handle this was different from mine and what I insisted we do in the Senate, which is to wear a mask and practice social distancing.' Now White House does have a mask policy and social distance distancing policy they say they follow in CDC guidelines. Um, but often you see people not wearing masks at least before the president's diagnosis, as masks were a personal choice in the White House. McConnell said he last visited on Aug. 6, Lauren."

Magarino: "Speaker Pelosi says the president needs to disclose more about his health. You were mentioning how reporters day in and day out are trying to get more information on his status. What move is she making? Potentially using the 25th Amendment?"

Liebergen: "So that amendment and continuity of presidential power in the case that a president is incapacitated or killed. It came out of the Kennedy assassination. So we'll learn more details about Pelosi's plan today. She's got a press conference planned, but this bill that she would introduce would theoretically set up Vice President Mike Pence becoming the acting president. But it's unlikely she's going to get a lot of serious consideration of this, unlikely that it will get all the way to vote in the House and the Senate. Most likely about just trying to get more health information out of the White House and get more updates on how the president is doing, Lauren."

Magarino: "Well, it seems like we all are newsy politics reporter Stephanie Liebergen. Thank you very much."