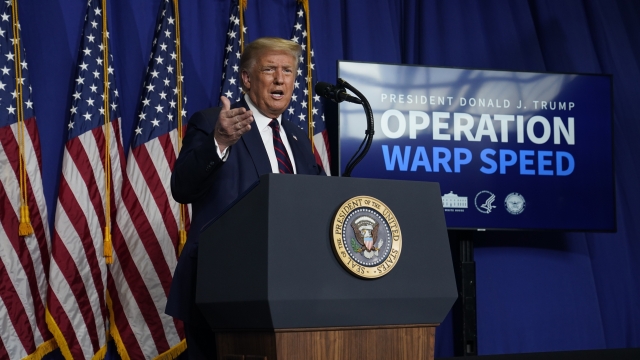 President Trump on Monday touting progress on a coronavirus vaccine in North Carolina, a state hit hard by the pandemic.

"Under Operation Warp Speed, we've shaved years off the time it takes to develop a vaccine. In some cases many years. And we've done it while maintaining the FDA gold standard for safety," said President Trump.

It's the latest in an effort by the president to reassert his commitment to defeating the coronavirus, as polling shows a majority of the country disapproves of the government's handling of the pandemic. Last week, the president restarted coronavirus briefings. With about three months until Election Day, the Trump campaign says the American people deserve to hear directly from the president.

Most polls show the president trailing presumptive Democratic nominee Joe Biden. And a recent NBC News/Marist poll of registered voters in North Carolina shows the president seven points behind in a state he won in 2016. The former vice president also leads 51% to 34% when voters were asked about who would better handle the coronavirus pandemic.

The Tarheel State has been hit hard by the coronavirus, with more than 114,000 confirmed cases. The president's reelection chances are likely tied to the country's ability to rebound from recent turmoil.

"America will develop a vaccine very soon, and we will defeat the virus and have it delivered in record time," said President Trump.

The vice president also traveled on Monday heading to Florida to receive a briefing on Phase 3 vaccine trials.

And Biden released a statement criticizing the pandemic response:

"We all hope the next phases of clinical trials will yield positive results to support an approval based on the scientific evidence, but the development of a new vaccine requires a dedication to science, coordination, transparency, truth, and fairness to all — and we have a President who stands for none of these things."

Biden — who has largely stayed from the campaign trail — visited Washington, D.C., to pay his respects to the late civil rights leader and congressman John Lewis. The president said he would not be attending Lewis' memorial.