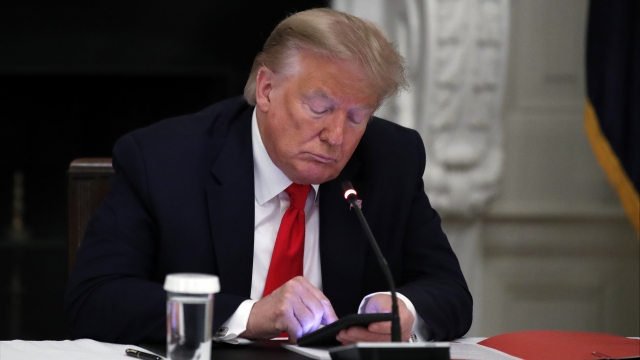 Twitter’s approach to “to world leaders, candidates, and public officials” is based on the principle that there’s a public interest in seeing what those leaders are saying, even if it’s potentially false or harmful.

But former office holders aren’t afforded this position. Twitter told Newsy: “This policy framework applies to current world leaders and candidates for office, and not private citizens when they no longer hold these positions.”

Despite Twitter’s recent efforts to take expanded action on accounts spreading election-related misinformation, including President Trump’s, experts who spoke to Newsy were split on whether the company would actually follow through with treating Trump as a private citizen and more closely police his posts.

"Those platforms, I think, with Donald Trump as a private citizen, will begin to treat him more like they treat the rest of us," said Mark Lukasiewicz, Dean of the Lawrence Herbert School of Communication At Hofstra University.

“Twitter is a commercial platform," said Molly Land, Professor of Law and Human Rights, University of Connecticut. "It has an interest in keeping Trump on their platform. These are platforms that have a business model and the business model is attracting eyeballs and he does that. So I think it might be hard for them to de-platform him."

Another reason researchers saw it as difficult to outright remove President Trump is that his political posts, as a private citizen, may still qualify as holding public interest.

"Trump partnering with another world leader, like saying, 'I know Putin decided this' falls within a more difficult grounds for it to be not in the public interest if he's speaking about something related to another world leader that he's created a relationship with," said Katie Joseff, Senior Research Associate at the Center For Media Engagement at the University of Texas.

Twitter’s approach could also be influenced by potential political backlash. When the company chose to take action on a New York Post story about Hunter Biden in October, the company was hit with a subpoena by the Senate to explain their decision.

"The administration's willingness to use its power to enforce its political priorities and Donald Trump's wishes has had an impact on their ability to control this sort of stuff. That factor is clearly going away now," Lukasiewicz said.

Joseff told Newsy that rather than de-platforming President Trump, Twitter may implement some of its recent election-related policies on offending tweets.

“I really don't think that they would take him off the platform. I think that there's more Twitter starting to experiment with more design implementations to increase friction for all types of spreading of misinformation," Joseff said.

While Twitter’s potential actions are still unclear, one likely thing is that Twitter could change their policies around public figures, given the president's unique online presence.

"The social media companies, they revise their policies often, in part because they continually encounter situations that they haven't before. Trump might present that kind of a situation by being the first … former U.S. president to have a robust social media presence," Land said.