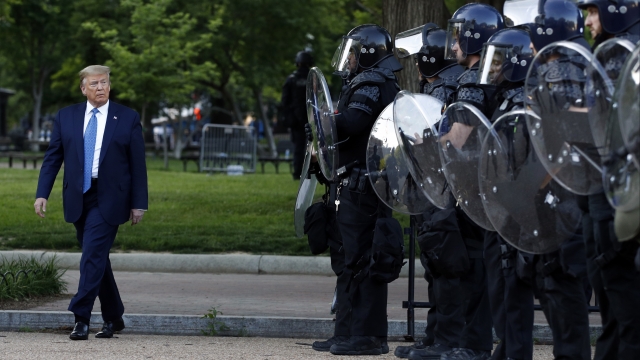 President Trump says he will invoke the Insurrection Act if state and local leaders don't take action against ongoing protests. The act allows a president to deploy the U.S. military to suppress civil disorder.

"If a city or state refuses to take the actions that are necessary to defend the life and property of their residents, then I will deploy the United States military and quickly solve the problem for them," President Trump said during a press conference Monday.

President Trump's remarks follow days of protests across the country over the deadly arrest of George Floyd in Minneapolis. Floyd, a Black man, died last Monday after a White Minneapolis police officer pressed a knee into his neck. Some of the protests have been marked with violence, looting and fires.

"I am mobilizing all available federal resources, civilian and military to stop the rioting and looting to end the destruction and arson and to protect the rights of law-abiding Americans, including your Second Amendment rights," President Trump said.

The Insurrection Act was most recently invoked during the 1992 Los Angeles riots and during Hurricane Hugo in 1989.

According to CNN, President Trump's remarks have left some Pentagon officials deeply wary. The outlet reports that some officials have tried to respond with strong cases as to why the deployment of active military troops is not yet warranted unless requested by state governors.

There is debate surrounding whether President Trump can legally deploy active U.S. troops to the cities under this act without the request from state governments. Governors, such as Illinois' J.B. Pritzker, are already pushing back on President Trump's comments, telling CNN, "I reject the notion that the federal government can send troops into the state of Illinois."