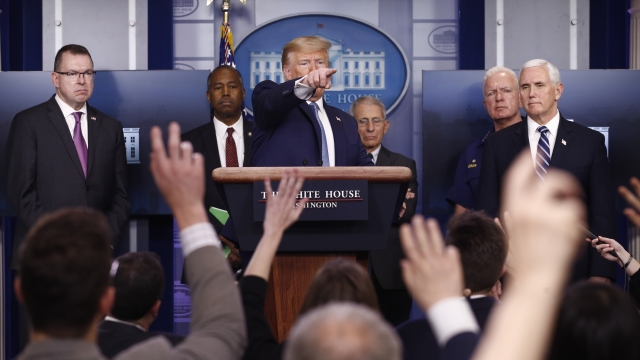 President Trump said Saturday The White House is "getting very close" to finalizing a stimulus package intended to curb the economic hardships of the coronavirus.

The president said during a press briefing his staff is working with both Democrats and Republicans to finalize details. A White House official said earlier in the day the stimulus could total over $2 trillion dollars.

During the briefing, Vice President Mike Pence said more than 195,000 U.S. citizens have been tested and received results. 19,000 tested positive.

He said one of his staff members tested positive for the virus, but is "doing well." Pence said neither he nor the president had contact with the employee, but he would get himself tested as a precaution.

"While the White House doctor has indicated he had no reason to believe that I was exposed and no need to be tested. Given the unique position that I have as vice president and as the leader of the White House coronavirus task force, both I and my wife will be tested for the coronavirus later this afternoon."

Both Pence and infectious disease expert Dr. Anthony Fauci stressed that people don't need to be tested unless they're showing symptoms of the virus.

Additionally, Fauci addressed reports of a national shortage of masks. He said he hoped to replenish hospitals' supplies within the coming days.