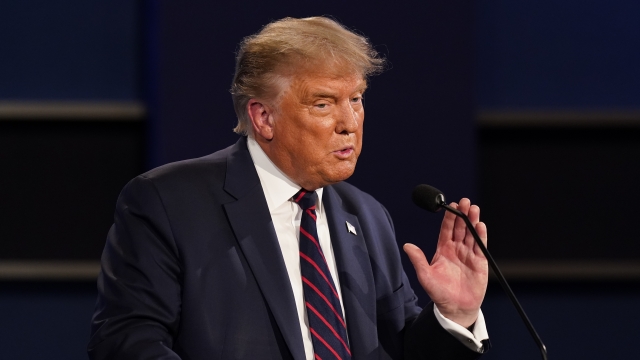 "This is going to be a fraud like you’ve never seen... I’m urging my supporters to go into the polls and watch very carefully... If I see tens of thousands of ballots being manipulated, I can’t go along with that."

A grim debate, ending with a president who says he may not accept the election results.

"Donald Trump seems convinced that the only possibility for losing an election is if there's fraud in the process. And that is dangerous. That's not a democracy. That's autocracy at work," Justin Levitt, a professor at Loyola Marymount University's law school said.

There's a real danger of using prosecutions of alleged voter fraud in order to suppress the vote.

Chiraag Bains, another former senior attorney in DOJ's Civil Rights Division, says the department is already working on Trump's behalf. It comes after Attorney General Bill Barr echoed the president's stance, saying foreign countries could make counterfeit ballots and announcing "potential issues" with nine ballots in Pennsylvania, seven of which it says were cast for Trump.

Bains says the Justice Department could open investigations into legal activities like helping people to get to the polls and giving people language assistance. They could even file criminal charges.

"The reality on the ground is that people have trouble voting because of barriers to the vote. Not that people are voting when they shouldn't be," Bains said.

Some say the debate benefited someone: Vladimir Putin.

"Putin looks at that and sees it as evidence that his tactics and probably more importantly, the trends that Putin's tactics prey on, are all working in Russia's favor," said Kendall-Taylor, Director of the Transatlantic Security Program, Center for a New American Security.

"Putin and other authoritarians like him, like [Chinese leader Xi Jinping], can point to moments like this and say, ‘See, the United States has no business telling other countries how to run their elections or lead their democracies,'" Kendall-Taylor said.