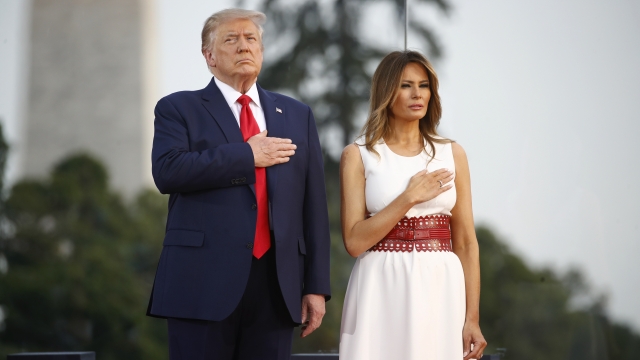 He said, "American heroes defeated the Nazis, dethroned the fascists, toppled the communists, saved American values, upheld American principles and chased down the terrorists to the very ends of the earth. We are now in the process of defeating the radical left, the Marxists, the anarchists, the agitators, the looters and people who in many instances have absolutely no clue what they are doing."

The president also took a swing at the media, accusing reporters of falsely labeling him and his supporters as racist.

The rise in COVID-19 cases caused officials across the country to urge Americans to celebrate Independence Day at home. When addressing the pandemic, the president continued to blame China for what he called a cover up.

And — avoiding a mention of nearly 130,000 U.S. deaths from coronavirus — President Trump without evidence claimed that 99% of COVID-19 cases are "totally harmless." The Food and Drug Administration's commissioner, Stephen Hahn, responded to the president's remarks on CNN on Sunday saying, “I’m not gonna get into who’s right and who’s wrong.” Johns Hopkins University reports the U.S. has a 4.6% coronavirus fatality rate.