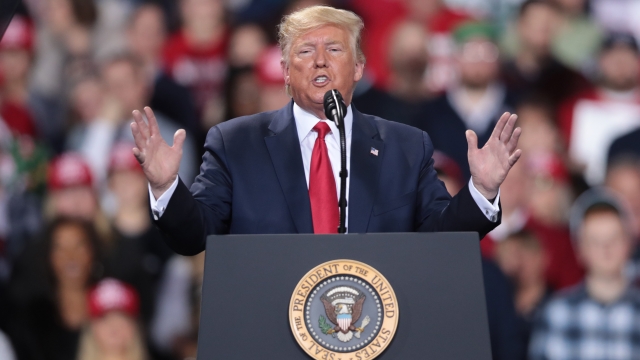 A defiant President Trump called impeachment a “suicide march” for Democrats at a rally here in Michigan that took place during Wednesday's historic vote.

"Through their depraved actions today, crazy Nancy Pelosi’s House Democrats have branded themselves with an eternal mark of shame."

The rally got off to a late start, with Vice President Pence saying Trump was watching the vote. Before it started, the president’s supporters waited outside for hours in the blistering cold. Most of them told us that the impeachment didn’t detract from their support for President Trump.

"I have always supported our president, thick and thin, doesn’t matter what. I think this impeachment process is a joke."

"Oh we’re excited to be here and support Trump."

"The way I see it, they are not really trying to impeach him, they’re trying to tell us our votes didn’t count."

But beyond the arena and the red sea of Make America Great Again hats, the country remains divided over impeachment. According to the latest Morning Consult/Politico poll, 50% of voters support impeachment and 43% oppose it. 50% back Trump’s removal from office in the Senate.