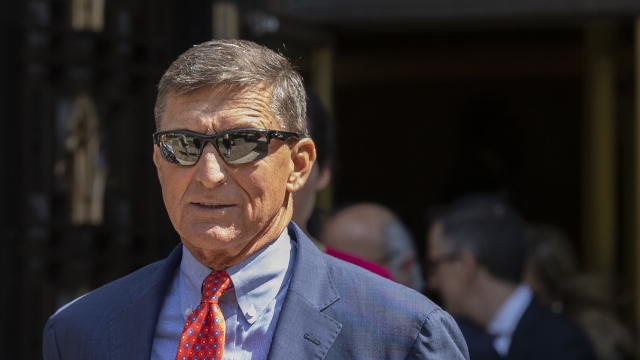 SMS
President Trump Considering a Full Pardon of Michael Flynn
By Gage Jackson
By Gage Jackson
March 16, 2020
The former U.S. National Security Adviser pleaded guilty in 2017 to lying to the FBI about conversations he had with a Russian ambassador.
SHOW TRANSCRIPT

He said, "So now it is reported that, after destroying his life & the life of his wonderful family (and many others also), the FBI, working in conjunction with the Justice Department, has 'lost' the records of General Michael Flynn. How convenient. I am strongly considering a Full Pardon!"

Flynn was President Trump's first national security adviser but resigned after just one month on the job.

He pleaded guilty in 2017 for lying to the FBI about conversations he had with a Russian ambassador.

Flynn is now attempting to withdraw his guilty plea claiming there was misconduct by the prosecutors. Fox News says that the Trump tweet may have been referring to a motion filed on Flynn's behalf in January that claims original handwritten notes from an FBI interview are missing.

Flynn's sentencing is currently on hold after Attorney General William Barr called for a full review of the case last month.