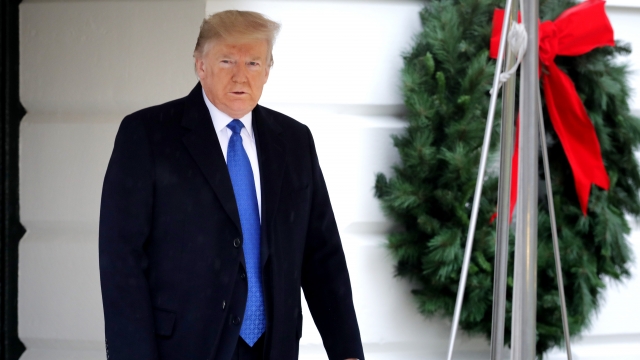 SMS
President Trump Cancels NATO Press Conference
By Ahmed Jawadi
By Ahmed Jawadi
December 4, 2019
​The president tweeted he "won't be doing a press conference at the close of NATO because we did so many over the past two days."
SHOW TRANSCRIPT

President Donald Trump abruptly canceled a press conference he was scheduled to participate in at the NATO summit in London.

The president tweeted Wednesday he "won't be doing a press conference at the close of NATO because we did so many over the past two days." He added he will "[head] back to Washington" once "today's meetings are over."

"Well, he's two-faced," President Trump said. "And honestly, with Trudeau, he's a nice guy, I find him to be a very nice guy. But, you know, the truth is I called him out on the fact that he's not paying 2%, and I guess he's not very happy about it. Look, I'm representing the U.S. and he should be paying more than he's paying and he understands that. So I can imagine he's not that happy, but that's the way it is."

Trudeau admitted Wednesday he was talking about President Trump in the video. He said his comments were in reference to the president's "unscheduled announcement" that the next G-7 summit will be held at Camp David, which Trudeau said he and the other leaders were "surprised ... and pleased to learn." Trudeau added "the relationship between Canada and the United States is extremely strong and I have a very good relationship with President Trump and his team."