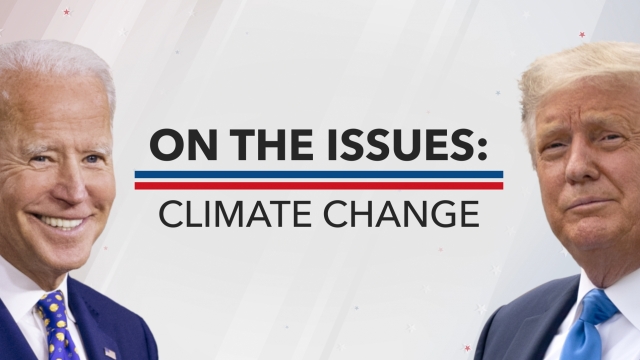 A skeptical President Trump has mostly resisted the link between human activity and climate change, and has made moves that reflect that. Still, the long-time real estate developer describes himself as an "environmentalist."

"I have done more environmental impact statements probably than anybody," President Trump said.

His opponent, Joe Biden has proposed a $2 trillion climate plan that would invest in clean energy in areas like infrastructure, the auto industry and agriculture.

"The fact is that every time the word climate change comes up, Donald Trump thinks hoax," Biden said. "Every time it comes up, I think jobs."

During his time in office, President Trump has rolled back many regulations designed to protect the environment, saying they are an unnecessary drag on the economy. That includes withdrawing the U.S. from the Paris Climate Accord, a global effort to combat climate change by reducing greenhouse gas emissions, which he's said is "very unfair" to the United States.

Both support fracking, a technique using high-pressure liquid to drill for oil and gas that has increased U.S. energy production but has also raised environmental concerns.

"With fracking, the shale revolution, and the tremendous surge in American energy production, we’re showing that we can create jobs, safeguard the environment," President Trump said.

President Trump has repeatedly said if Biden wins the election he will ban fracking.

"No matter how many lies he tells, I am not, not, not banning fracking," Biden said. "Period."

President Trump has also opened up more public land to oil and gas extraction. In August, the Trump administration made way for drilling in part of Alaska's Arctic National Wildlife Refuge. But the president has also announced he was banning new drilling off the coasts of Florida, Georgia and South Carolina. Biden's campaign said he will ban new drilling on federal lands and waters and double offshore wind power.