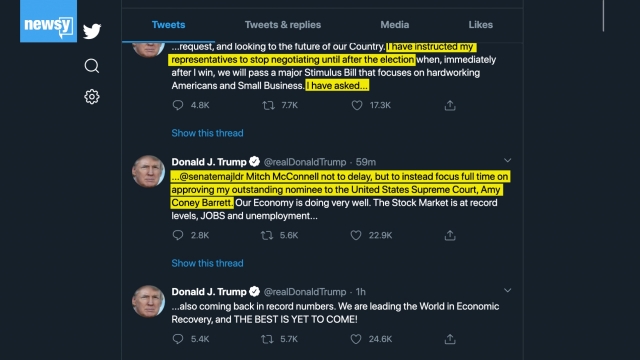 After months of negotiations between the White House and Capitol Hill, President Trump has announced that a second round of coronavirus relief is dead.

In a series of afternoon tweets, President Trump said he instructed his representatives to stop negotiating until after the election, instead asking Senate Majority Leader Mitch McConnell to focus full-time on confirming his nominee to the U.S. Supreme Court, Amy Coney Barrett.

The news sent shock waves through the stock market, with the Dow Jones Industrial Average plummeting over 600 points in the 20 minutes after the president's tweets before closing the day down about 1.3%.

House Speaker Nancy Pelosi blasted the move after months of negotiations with Treasury Secretary Steven Mnuchin, releasing a statement saying, in part, "Clearly, the White House is in complete disarray."

Earlier in the day, Federal Reserve Chairman Jerome Powell appeared in a lecture to the National Association for Business Economics, saying another package is needed to bolster America's recovery from the pandemic

"Since it appears that many [Americans] will undergo extended periods of unemployment, there is likely to be a need for further support," he told attendees. "Too little support would lead to a weak recovery, creating unnecessary hardship for households and businesses."

The change in the Senate's schedule earlier this week had already set the stage for COVID relief talks to face some sort of delay, with no votes slated to take place in the Senate Chamber for another two weeks — just two weeks before the election.

"We needed to concentrate on what’s achievable," Senate Majority Leader Mitch McConnell told reporters on Capitol Hill after the president's tweets on Tuesday. He added that he agreed with the decision to halt relief talks until after the election.

Republican Sen. Susan Collins, who is locked in a tight reelection battle in her home state of Maine, shot back at the White House late Tuesday, likely fearful of implications the announcement may have on her chances for reelection.

"Waiting until after the election to reach an agreement on the next Covid-19 relief package is a huge mistake," she said in a statement.

With less than a month left before the election, millions of Americans are now unlikely to receive additional unemployment insurance, Paycheck Protection Program funds, additional relief for state and local governments, and rental assistance.