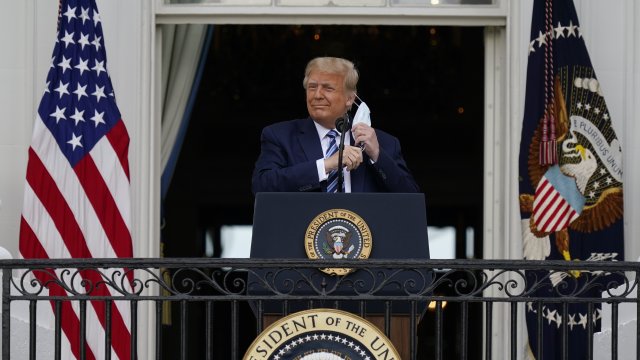 President Trump has resumed public campaigning following his COVID-19 diagnosis — beginning with a speech from The White House balcony.

Two-thousand people were invited to see the president leave isolation for the first time. In his speech, he focused on maintaining "law and order" and urged people of color to leave the Democratic Party.

"Every day more Black and Latino Americans are leaving behind left-wing politicians and their failed ideology," the president said. "We're going to build up a peaceful and safer neighborhood program like you haven't seen, with the highest standards of policing."

Over a dozen of the president's staff and allies contracted COVID-19 after that Rose Garden ceremony for Supreme Court nominee Amy Coney Barrett. The White House hasn't disclosed whether the president has had a negative test since his positive diagnosis Oct. 2.

While the president likely couldn't infect anyone from his balcony where he spoke Saturday, the risks may have been higher from people packed, without social distancing, in the The White House crowd below.

Regardless of his diagnosis, the president is set to return to the campaign trail, beginning with a Florida rally on Monday.