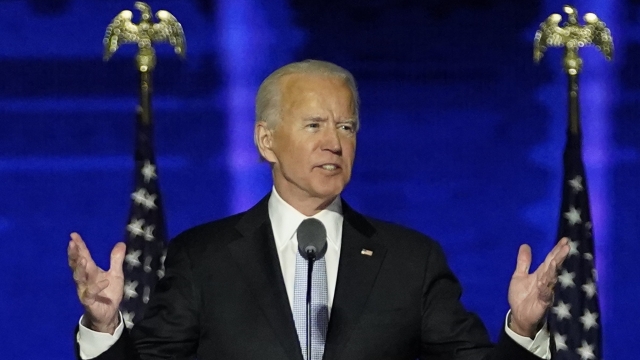 Speaking before a crowd of hundreds of supporters gathered in Wilmington, Delaware, on Saturday, Joe Biden delivered his victory speech as the 46th president of the United States.

"I pledge to be a president who seeks not to divide but unify. Who doesn't see red states and blue states, only sees the United States," President-elect Joe Biden said.

Reflecting on promises made during his campaign, Biden said his presidency will tackle issues that have plagued the country in recent months, starting with the COVID-19 pandemic.

"We cannot repair the economy, restore our vitality, or relish life's most precious moments," Biden said, "until we get it under control."

However, at the heart of his speech was a request for all Americans to join him in restoring national unity.

A message that was echoed by Vice President-elect Kamala Harris.

"Joe is a healer. A uniter. A tested and steady hand. A person whose own experience of loss gives him a sense of purpose that will help us as a nation reclaim our own sense of purpose," Vice President-elect Kamala Harris said.

Biden's speech came after an eventful day which saw celebrations erupt in cities across the U.S. Supporters took to the streets in Wilmington; New York City; Washington, D.C.; and Chicago.

"This is the type of person he is. He doesn't see race, color, creed, economic status, any of that. And that is what we need in this country," Carol Reilly, a Biden campaign supporter, said.

Congratulations from around the world have been pouring in from the leaders of foreign countries, including Argentina, Ireland and Italy. Canadian Prime Minister Justin Trudeau praised the alliance between his country and the U.S., saying he's looking forward to working together.

Former President Barack Obama and former first lady Michelle Obama posted a statement saying, "We are fortunate that Joe has what it takes to be president and already behaves that way."

Hillary Clinton, who faced President Donald Trump in 2016, hailed "a new page for America" and a "history-making ticket."

Messages applauding the president-elect have also come in from across the aisle, with the Republican Party's 2012 presidential nominee, Sen. Mitt Romney, congratulating Biden and Harris on Twitter, saying both are "people of good will and admirable character."

Republican Congressman Adam Kinzinger of Illinois posted a similar message, writing, "Our nation deserves two competing parties who can work together when possible, and compete honorably when not."

"Let us be the nation we know we can be. A nation united, a nation strengthened, a nation healed," Biden said.

So far President Trump is refusing to concede and has promised to bring a legal challenge over the election to the Supreme Court, arguing unsubstantiated claims that fraud has occurred in the vote-counting process. As for what's next, Dec. 8 marks the deadline for resolving election disputes at the state level. Biden has asked that the country have patience as final ballots are tallied and legal disputes are addressed.