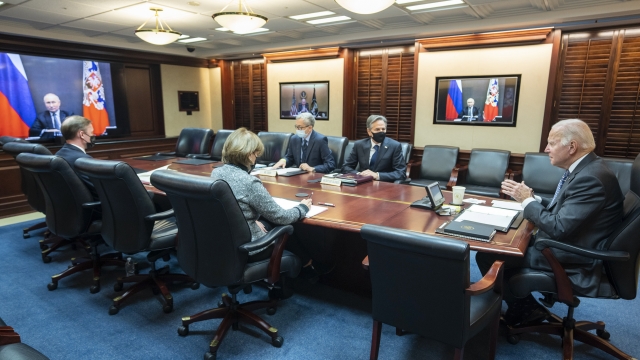 President Biden said he was "very straightforward" with Putin during their call Tuesday, warning the Russian leader that he will pay a heavy price if he invades Ukraine.

"There were no minced words," President Biden said at the White House before departing for Kanzas City. "It was polite, but I made it very clear. If in fact he invades Ukraine, there will be severe consequences, severe consequences. Economic consequences like you've never seen. I am absolutely confident he got the message."

Asked by reporters if he'd ruled out U.S. troops on the ground to stop Russia, President Biden said "that's not on the table," saying that a U.S. obligation to protect NATO allies if they come under attack doesn't extend to Ukraine, which is not in the Atlantic military alliance.

"The idea that the United States is going to unilaterally use force to confront Russia for invading Ukraine is not in the cards right now," President Biden said.

At the same time, he said that the U.S., its allies and Russia could sit down for talks to discuss Moscow's grievances about NATO's expansion.

"We hope by Friday we're gonna be able to say, announce to you we're having meetings at a higher level, not just with us, but with at least four of our major NATO allies, and Russia to discuss the future of Russia's concern relative to NATO writ large and whether or not we could work out any accommodations as it relates to bringing down the temperature along the eastern front (in Ukraine)," President Biden said.

Putin, for his part, promised that Moscow will submit its proposals for a security dialogue with the U.S. in a few days. He reaffirmed his denial of planning to attack Ukraine, but said that Moscow can't remain indifferent to NATO's possible expansion to its neighbor.

Putin, who entered Tuesday's call with President Biden looking for Western guarantees precluding NATO's expansion to Ukraine, countered Western arguments that Russia has no say in the alliance expansion by arguing that security in Europe can only be mutual.

"Every country certainly has the right to choose the most acceptable way of ensuring its security, but it must be done in a way that doesn't infringe on the interests and undermine security of other countries, in this case Russia," Putin said. "Security must be global and equally cover everyone."

"We can't fail to be concerned about the prospect of Ukraine's accession to NATO, because that will undoubtedly lead to the deployment of military contingents, bases and weapons that would threaten us," he told reporters after talks in Sochi with visiting Greek Prime Minister Kyriakos Mitsotakis.

He described the two-hour conversation with President Biden as "very open, specific and, I would say constructive," adding that he and President Biden have agreed to ask experts to conduct talks on security in Europe.

"Russia will prepare its arguments literally in a few days, within a week, and we will submit it to the American side for consideration," he said.

"We proceed from the assumption that this time are concerns will be heard," he said, noting that the West ignored Moscow's complaints in the past about NATO's expansion eastward to incorporate former Soviet allies in Central and Eastern Europe and former Soviet republics in the Baltics.

Asked Wednesday if Russia was going to attack Ukraine, Putin called the question provocative, saying that "Russia is conducting a peaceful foreign policy, but it has the right to ensure its security in the mid- and long-term perspective."

The leader-to-leader conversation — President Biden speaking from the White House Situation Room, Putin from his residence in Sochi — was one of the most important of President Biden's presidency and came at a perilous time.

U.S. intelligence officials have determined that Russia has moved 70,000 troops near the Ukraine border and has made preparations for a possible invasion early next year. Moscow has denied any plans to attack Ukraine, rejecting Western concerns as part of a campaign to smear Russia.

White House officials made clear that President Biden is not interested in putting U.S. troops in harm's way defending Ukraine. But U.S. National Security Adviser Jake Sullivan noted that President Biden said the U.S. would also "provide additional defensive material to the Ukrainians … and we would fortify our NATO allies on the eastern flank with additional capabilities in response to such an escalation."

Sullivan said the U.S. believes that Putin hasn't yet made a final decision to invade. President Biden was vice president in 2014 when Russia annexed Ukraine's Crimean Peninsula and backed an insurgency in eastern Ukraine, which has killed more than 14,000 people and is still an active conflict.

Putin's foreign affairs adviser Yuri Ushakov told reporters that Putin countered President Biden's expressions of concern about the Russian troop buildup near Ukraine by snapping: "You Americans are worried about Russian battalions on Russian territory thousands of miles away from the United States, while we are really worried about our security."

Ukrainian President Volodymyr Zelenskyy said Wednesday that "it was positive that the U.S. president spoke to the Russian president," adding that he would comment in detail on Thursday, after his own phone call with President Biden.

With no immediate breakthrough on the Ukraine question, the U.S. emphasized a need for diplomacy and de-escalation, while issuing stern threats to Russia about the high costs of a military incursion.

A top U.S. envoy, Victoria Nuland, warned that a Russian invasion of Ukraine would also jeopardize a controversial pipeline between Russia and Germany known as Nord Stream 2, which is not yet operating.

Asked by Welt television if he would be prepared to use the pipeline to pressure Russia, new German Chancellor Olaf Scholz replied "we have a very clear position: we want the inviolability of borders to be respected by all."

"Everyone understands that there would be consequences if that weren't the case, but what matters now is to do everything so that it stays this way, that they aren't violated," Scholz said.