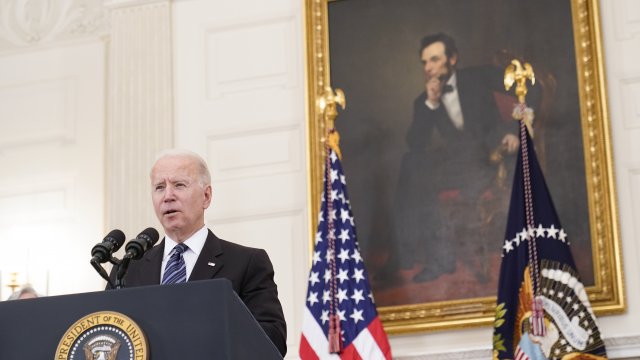 President Biden says the spike in violent crimes we tend to see during the summer could be "more pronounced" this year as states re-open.

He's urging lawmakers to come together to pass laws he says would reduce gun violence.

"Folks, this shouldn't be a red or blue issue, it's an American issue. We're not changing the constitution. We're enforcing it, being reasonable," he said. "We're taking on the bad actors doing bad and dangerous things in our communities and our country. Talk to us responsible gun owners and hunters. They'll tell you there's no possible justification for having a hundred rounds in a magazine of a gun."

In the meantime, the president has unveiled a strategy aimed at reducing gun violence and other violent crimes. It includes a zero-tolerance policy for gun dealers who don't follow federal laws. Increasing ATF funding which would require Congressional approval. And creating federal strike forces to target gun traffickers in five major U.S. cities.

The plan also provides state and local governments guidance on using American rescue plan funding to hire more law enforcement officers and invest in technology that would improve their responses to gun violence. The strategy also includes investing in evidence-based community violence interventions and creating a collaborative of officials from 15 cities.

"Schools out for the summer. Teenagers who are in tough neighborhoods: no jobs, more trouble. We know summer job trainings, summer jobs, training and recreation for young people work. They help make sure young people pick up a paycheck instead of a pistol," he said.