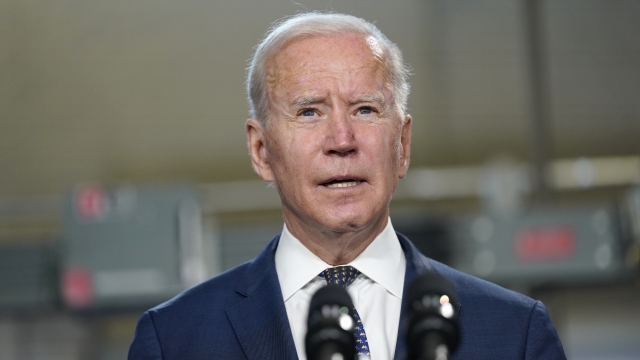 President Biden has been hitting the road to tout his ambitious and pricey proposals focused on infrastructure, child care and education.

"A once-in-a-generation investment in our families, in our children that addresses what people care most about and most need," President Biden said.

The president’s trip to Louisiana Thursday will be his fourth since last week's joint address to Congress. The vice president, first lady and second gentleman have also made and planned a number of stops. Each focused on selling the public on nearly $4 trillion in new spending and some tax increases on corporations and wealthier Americans.

"We have a huge opportunity here to provide fast, safe, reliable, clean transportation in this country, and transit is part of the infrastructure," President Biden said.

Some of the president's proposals include things like retrofitting transportation infrastructure, expansion of broadband internet access and upgrades for buildings, an extension of key tax credits for families, and providing universal pre-K and free community college.

And despite the high price tag, recent polls show the majority of Americans approve of his ideas: 58% of voters support the president's American Families Plan, while a separate poll notes 57% of voters are in favor of his infrastructure bill. But that public approval has yet to translate to the House and Senate Republicans needed to pass the legislation.

"I would point out that if you look at all of the president's recent proposals, they total more than $4.1 trillion. That's the amount that we spent to win World War II," said Maine GOP Sen. Susan Collins.

"Public polling is done at a national level, mostly not at the state and local level," said Todd Belt, the director of the political management program at the George Washington University. "And of course, members of the House represent districts which may be very different in terms of their preferences than the nation as a whole. States as well."

"I think the president's approach of going back to the places and reminding people what he did for them, I think is strategic," said Seawright. "And I think it's important because at the end of the day, these are what some people view as Republican states, but yet they voted for him."

The White House has indicated that negotiations for the proposed legislation are ongoing and a meeting between the president and a group of Senate Republicans could take place as early as next week.