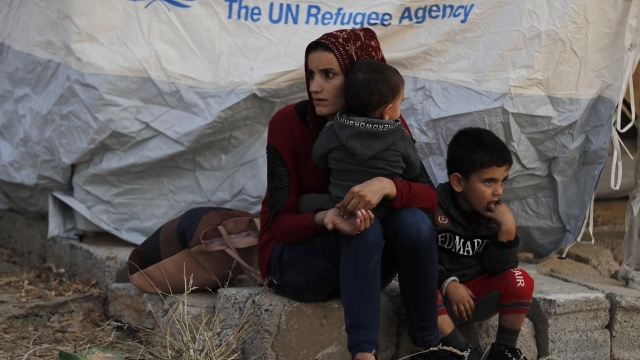 SMS
President Biden's Plan To Admit More Refugees Faces Many Obstacles
By Ben Schamisso
By Ben Schamisso
February 4, 2021
The president intends to increase the number of refugees allowed into the U.S. next fiscal year to 125,000 — over eight times the current level.
SHOW TRANSCRIPT

"It's going to take time to rebuild what's been so badly damaged, but that's exactly what we are going to do."

President Biden announced a plan on Thursday to welcome more refugees in the U.S. after Donald Trump cut admissions to historic lows.

The president said he will increase the number of refugees allowed into the U.S. next fiscal year to 125,000 — more than eight times the current level.

"We're all very excited to hear that we will be bringing in more refugees. And I believe that we can get it done," said Suzanne Akhras Sahloul, founder and executive director of the Syrian Community Network in Chicago.

While advocates cheered the move, experts caution that rebuilding the refugee pipeline will be a difficult and lengthy process — especially during the pandemic.

"It's difficult to say, oh, we're just going to vet refugees less. That's not something that the American public wants to hear. They're going to need to look at the vetting that was put into place during the Trump administration and decide what is good and what needs to go," said Sarah Pierce, a policy analyst at the non-partisan Migration Policy Institute.

Over the past four years, more than a third of U.S. resettlement offices closed as the Trump administration slowed arrivals to a crawl with new "extreme vetting" procedures.

The pandemic, lack of funding and closure of refugee processing offices abroad will also present challenges.

"We're raring to go. But it's easier said than done," said Michael Knowes, president of a union that represents refugee officers in the D.C area and abroad.

Knowles urges the Biden administration to focus on rebuilding capacity rather than hitting what he calls an "arbitrary number."

But with the right resources and leadership, Knowles says, it can be done.

"We moved about 150,000 Vietnamese refugees after the fall of Saigon and resettled them in the U.S. within six months. It can be done, but it requires a great commitment and lots of cooperation," Knowles said.