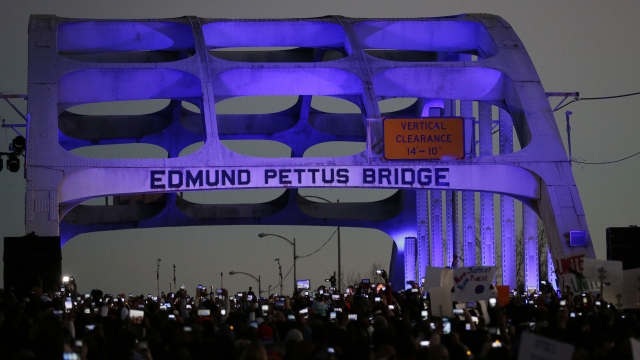 More than a half century ago, civil rights demonstrators were beaten in Selma, Alabama by state troopers in a march for voting rights. The late Congressman John Lewis suffered a skull fracture for what he would later call "good trouble."

That Bloody Sunday in 1965 — 56 years ago — was marked this weekend by President Joe Biden signing an executive order to ease voting.

The president said: "For Black Americans, the fundamental right to vote has been denied by white supremacy hiding both behind white hoods and in plain sight in state houses and courtrooms."

President Biden said in a prerecorded address for the Martin and Coretta King Unity Breakfast in Selma that "every eligible voter should be able to vote and have that vote counted."

Under the order, the president wants federal agencies to distribute voter registration and vote-by-mail ballot applications. He also wants to to give federal employees time off to vote or volunteer as poll workers, and overhaul the government's Vote.gov website.

The president's move comes as some state legislatures are moving to tighten voting laws. Supporters say the changes are focused on stopping fraud but critics — like these demonstrators in Georgia — say the changes will make it harder for people to vote.

This year's Bloody Sunday observation marked the first without Rep. Lewis, who died in July at the age of 80.