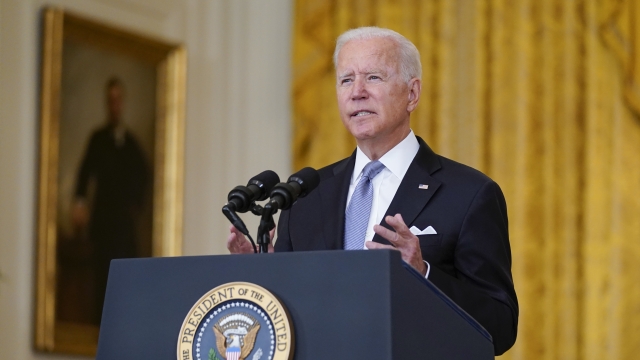 " I always promised the American people that I would be straight with you. The truth is, this did unfold more quickly than we had anticipated," President Biden said.

President Biden publicly addressing the dire situation in Afghanistan after the fall of the U.S.-backed government and takeover by the Taliban. A sharp contrast to the picture he painted a month ago.

"The jury is still out but the likelihood there's going to be Taliban overrunning everything and owning the whole country is highly unlikely," Biden said.

Today a much different scene in the country and the President not backing down on his decision to bring U.S. troops home after nearly 20 years of war, blaming Afghanistan’s political leaders and military for fall of the country’s government.

“Afghanistan political leaders gave up and fled the country," Biden said. "The Afghan military collapsed. Sometime[s] without trying to fight.”

The administration, quick to catch blame for the chaotic scenes surrounding the U.S. troop pullout...even political allies say the administration needs to own up to the situation.

“I strongly recommend to President Biden that he take responsibility and admit the mistakes that were made," said Leon Panetta. "He has been, I think, truthful with the American people and he has got continue to be very truthful. We have been through a difficult few days here in Afghanistan.”

The Pentagon announcing an additional 1,000 troops will be sent back into the country to safely evacuate U.S. personnel, bringing the total number of U.S. troops assisting with evacuations to 6,000.

“When you look at the images out of Kabul that would have been difficult for anybody to predict," said John Kirby.

Biden added that the U.S. will continue to carry out counter-terrorism operations in Afghanistan, even without boots on the ground. Saying America now faces challenges in other parts of the world.

"And that's why as President I’m adamant we focus on the threats we face today in 2021, not yesterday’s threats," Biden said.

The U.S. government has evacuated the embassy in Kabul and urged all Americans to leave the country.