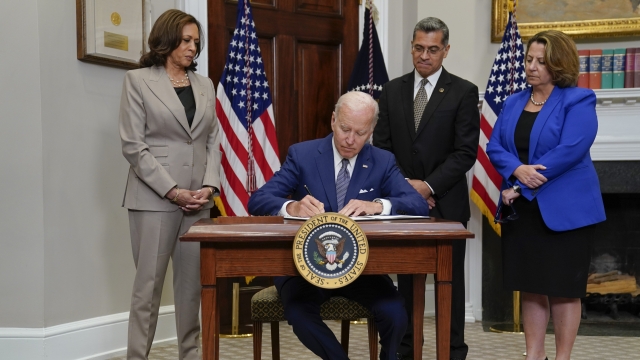 President Biden is making moves to restore legal abortion, an access revoked by the Supreme Court.

"The practice of medicine, let me emphasis, should not be frozen in the 19th century. Consider the challenge accepted, in court. In the meantime, I'm signing this important executive order," Biden said.

That order provides a host of safeguards for reproductive health care nationwide.

Those protections include access to contraception, medication abortion, and emergency reproductive medical care.

It also calls on the justice department to convene legal representation for patients and providers seeking or offering abortion services. That includes traveling out of state for an abortion, and asks the head of the Federal Trade Commission to protect patient privacy.

"There's increasing concern that extremist governors, and others, will try to get that data off your phone, which is out there in the ether, to find what you're seeking, where you're going, and what you're doing in regard to your health care. Talk about no privacy," Biden said.

"The court has made clear it will not protect the rights of women period," Biden said.

It follows mounting pressure from Capitol Hill for the White House to do more in response.

Just days after the overturning of Roe and Casey, Democratic senators penned a letter to the President saying, in part , "now is the time for bold action to protect the right to an abortion. You have the power to fight back."

But the President says he's limited in what he or his party can do.

"The fastest way to restore Roe is to pass a national law codifying Roe, which I will sign immediately upon its passage, on my desk," Biden said.

The rest, he says, lies in Americans' hands. And that means taking action come the time for the midterms.

"The only way to fulfill and restore that right for women in this country is by voting. By exercising the power at the ballot box. The court now, now, practically dares the women of America to go to ballot box and restore the very right they've taken away," Biden said.

And his party, at least in part, seems to agree.

"Make no mistake again: it's all on the ballot in November," said Speaker of the House, Nancy Pelosi.

But when it comes to frustrated American voters, that may not be enough.

"Voting is not all. They are in there. They need to do something. We voted for them and we are paying them to do something. So at least try and get shut down," Nadine Seiler, a protester, said.