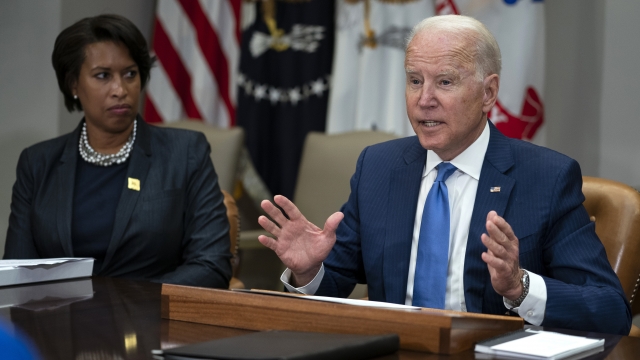 He's expected to make the moral case against infringing on people's fundamental right to vote.

President Joe Biden will lay out the “moral case” for voting rights as he faces growing pressure from civil rights activists and other Democrats to combat efforts by Republican-led state legislatures to restrict access to the ballot.

Biden has declared that protecting voting rights was the central cause of his presidency, but the White House has taken sharp criticism from allies for not doing more while contending with political headwinds and stubborn Senate math that have greatly restricted its ability to act.

Biden’s speech Tuesday in Philadelphia, to be delivered at the National Constitution Center, is intended as the opening salvo of a public pressure campaign, White House aides said, even as legislative options to block voting restrictions face significant obstacles.

“He’ll lay out the moral case for why denying the right to vote is a form of suppression and a form of silencing,” White House press secretary Jen Psaki said Monday as she previewed the speech. “He will redouble his commitment to using every tool at his disposal to continue to fight to protect the fundamental right of Americans to vote against the onslaught of voter suppression laws.”

Several states have enacted voting restrictions, and others are debating them, as Republicans have seized on former President Donald Trump’s false claim of massive voter fraud in the 2020 election as a pretense for curtailing ballot access.

Psaki said Monday that Biden will vow to “overcome the worst challenge to our democracy since the Civil War.” But aides have suggested that his address will not contain much in the way of new proposals.

Democrats on Capitol Hill have already tried to respond with a sweeping voting and elections bill that Senate Republicans united to block. Most Republicans have similarly dismissed a separate bill, the John Lewis Voting Rights Advancement Act, which would restore sections of the Voting Rights Act that the Supreme Court previously weakened.

Those roadblocks have increased focus on the Senate filibuster, which, if left in place, would seem to provide an insurmountable roadblock to the pair of voting rights overhaul measures pending in Congress. Republicans have been unanimous in their opposition, and it would take the elimination or at least modification of the filibuster for the bills to have a chance at passage.

Moderate Democrats like Sen. Joe Manchin of West Virginia and Sen. Kyrsten Sinema of Arizona so far have expressed reluctance to changing the Senate tradition. The voting bills have little other chance of passage in a body that is a 50-50 deadlock, with Vice President Kamala Harris breaking the tie.

Biden's long-awaited speech was to roll out just hours after a group of Democratic Texas lawmakers arrived in the nation's capital after fleeing their state to try to kill a Republican bill making it harder to vote in Texas. The legislators said they were ready to remain in Washington for weeks, forcing a dramatic new showdown over voting rights in America.

Private planes carried a large group of Democrats from Austin to Washington, the lawmakers skipping town just days before the Texas House had been expected to give early approval to sweeping new voting restrictions in a special legislative session. They hoped to deprive the Legislature of a quorum — the minimum number of representatives who have to be present for the body to operate.

Hours later, Republican Gov. Greg Abbott said he would keep calling special sessions through next year if necessary, and raised the possibility of Democrats facing arrest upon returning home.

Many Democrats have expressed frustration with the lack of White House push to reform the filibuster, with civil rights activists stressing that Biden was elected with broad support from Black people whose votes are often put at risk by voting restrictions. House Majority Whip Jim Clyburn, a longtime Biden ally, urged this week that the filibuster be modified for voting rights legislation.

Biden, a veteran of the Senate, has offered some support for filibuster changes but has not put his political weight behind the issue. He and Harris, who is leading the administration’s efforts on voting rights, met last week with some of the civil rights leaders, who made clear that they expected a legislative solution.

“Our backs are against the wall. This is the moment. We have no more time,” said Sherrilyn Ifill, president of the NAACP Legal Defense Fund, after the meeting. “I told the president: We will not be able to litigate our way out of this threat to Black citizenship.”

Although not abandoning hope of a legislative solution, the West Wing has been shifting focus to other measures to protect the vote, including legal remedies pursued by the Justice Department and in individual states, according to the officials. There also will be an emphasis on boosting voter turnout, with aides pointing to the successes Democrats had in getting out votes last year during the height of the pandemic.

Officials concede, though, that turning out voters is always harder in a nonpresidential election year. Some frustrated aides, seeing the reality in the Senate, believe too much of a focus has been placed on federal legislative measures and think that civic and business groups can also play a role in fighting the voting restrictions, noting that an outcry in Georgia helped water down some of the GOP’s proposed plans.

Many Republicans continue to question the 2020 election’s outcome, despite the absence of evidence of fraud. Republican-elected officials in a number of states have responded by enacting restrictions on early voting and mailed-in ballots, as well as tougher voter identification laws, prompting some liberals to demand that Biden do more.