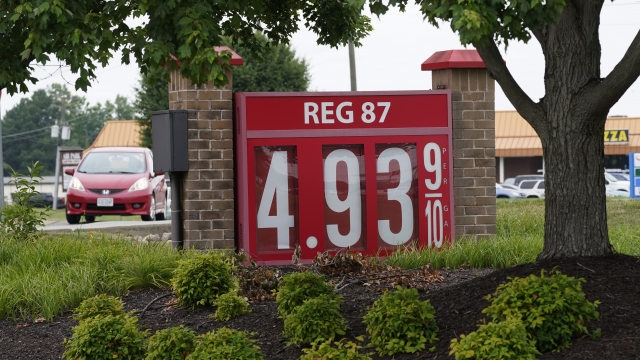 SMS
President Biden Asks Congress To Suspend Gas Tax
By Isbella Diaz
By Isbella Diaz
June 22, 2022
The White House estimates suspending both federal and state gas taxes would save drivers, on average, about 50 cents per gallon.

Drivers across the country are finally getting some good news.

“Today I’m calling on Congress to suspend the federal gas tax for the next 90 days," President Biden said.

That proposal would drop gas prices down 18.4 cents a gallon, a much needed savings as gas hovers just below $5.00

But the Biden administration doesn’t want to stop there, it’s also calling on governors to suspend their state gas taxes, something some states like New York and Florida already have in the works.

“Now I fully understand that the gas tax holiday alone is not gonna fix the problem, but it will provide families some immediate relief, just a little bit of breathing room — as we continue working to bring down prices for the long haul," President Biden said.

The White House estimates suspending both federal and state gas taxes would save drivers, on average, about 50 cents per gallon.

But it’s far from a done deal. The President needs Congress’ support to suspend at the federal level, and he’s already facing pushback on Capitol Hill.

"This ineffective administration's big new idea is a silly proposal that senior members of their own party have already shot down well in advance," Senate Minority Leader Mitch McConnell said.

And McConnell’s not wrong. Top Democrats worry suspending the federal gas tax will deplete the highway trust fund, used to fund infrastructure projects, with some calling the proposal a “shortsighted and inefficient way to provide relief.” But the President maintains the funds will still be there.

"With the tax revenues up this year, and our deficit down over $1.6 trillion this year alone, we’ll still be able to fix our highways and bring down the price of gas. We can do both at the same time," President Biden said.

Reports estimate a gas tax holiday could save consumers roughly 3.6% at the pump. But House Speaker Nancy Pelosi has argued there’s no guarantee that money will go to American families.

“We’re paying for something to give a break to the oil companies, that aren't even going to the consumer. So that’s the con. The pro is very ‘showbiz’. Let’s just do something, there it is. But it’s not necessarily landing in the pocket of the consumer," Speaker of the House Nancy Pelosi said.

And for months, Republicans have been lambasting the idea of a gas tax holiday as nothing more than an “election-driven, political gimmick”.

That term was also used by would-be President Barack Obama in 2008, opposing similar proposals by Republican and Democratic candidates at the time.

"We’re arguing over a gimmick to save you half a tank of gas," he said in 2008. "This isn’t an idea designed to get you through the summer. It’s designed to get them through an election."

But the Biden administration says, it’s a different time, calling for desperate measures.

Amos Hochstein is the Senior Advisor for Energy Security at the State Department.

“In the conditions that we are in today, that's not a gimmick, that's a little bit of breathing room for the American people as we get into the summer driving season," he said.

In the meantime, the President is calling on oil and gas companies, to make sure the full amount of any future savings, ends up in the hands of consumers.

“To the companies running gas stations, and setting those prices at the pump, this is a time of war — global peril, Ukraine. These are not normal times. Bring down the price you are charging at the pump to reflect the cost you are paying for the product. Do it now. Do it today. Your customers, the American people, they need relief now," President Biden said.