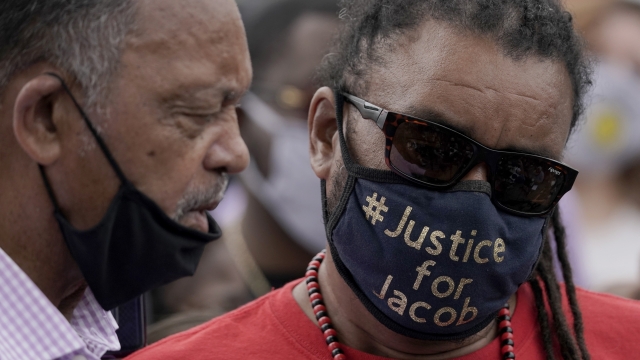 He made the trip even though local officials had said now is not the time.

"I think that Kenosha at this present time needs peace and needs to heal and needs people to allow us to do that," Kenosha Mayor John Antaramian said.

"Jacob Blake was shot seven times in the back by a Kenosha police officer over a week ago. His family says he's still in the hospital, paralyzed from the waist down. They've called the incident "attempted murder" and are calling for the officer who shot Blake to be indicted. During the president's visit here, he held a roundtable with law enforcement on the protests.

"Some people thought it would be a good thing for me to come, a bad thing,” President Trump said. "I just wanted to come. I really came today to thank law enforcement."

Local law enforcement said there’s been more than 200 arrests since the start of the protests with over half of them from outside of Kenosha. The president, notably, didn't have plans to meet with Blake's family during the visit.

"They wanted me to speak, but they wanted to have lawyers involved," President Trump said. "And I thought that was inappropriate. So I didn't do that."

While President Trump was touring downtown Kenosha and meeting with law enforcement, Jacob Blake's family and many community members gathered elsewhere in the small city. On the same block where Blake's life was changed forever.

"We don't have any words for the orange man," Justin Blake, Jacob's uncle, said. "All I ask is that he keep his disrespect, his foul language far away from our family. We need a president that’s going to unite our country and take us in a different direction."

This "community celebration" was called Justice for Jacob and organizers say it's a chance for the Kenosha community to rebuild. There's free haircuts, a bouncy house and voter registration. Organizers say this was the response they wanted to give President Trump's arrival.

"I think it's unnecessary, it's divisive," Tanya Mclean, a friend of the Blake family and one of the event's organizers, said. "We all know why he's here. He's definitely not coming to heal our community. He doesn't care about our community so he's here for his own political agenda. I mean, everyone knows that."