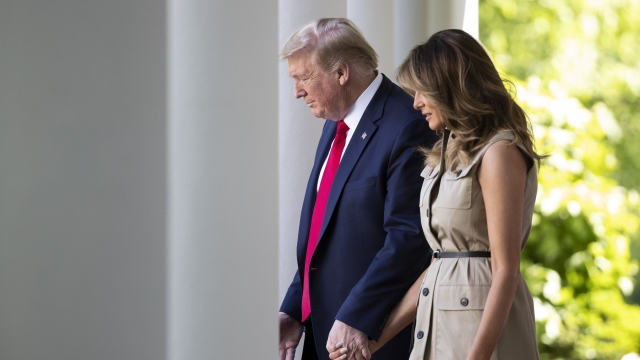 SMS
Trump To Be Tested Daily After Personal Valet Diagnosed With COVID-19
By Katherine Biek
By Katherine Biek
May 8, 2020
Vice President Mike Pence and others who work in close proximity to President Trump will also now be tested daily.
SHOW TRANSCRIPT

The White House is increasing its internal coronavirus testing efforts after one of the president's personal valets tested positive.

During an Oval Office meeting on Thursday, President Trump said he'll now be tested daily. A White House spokesperson confirmed Vice President Mike Pence and others who work in close proximity to President Trump will also be tested that often.

Up until this point, high-level officials at the White House have been getting tested weekly for the virus with an Abbot Laboratories test that gives results in as little as five minutes.

While talking to reporters about his valet's diagnosis, President Trump pointed out that testing isn't always reliable.

The president said he'd had "little contact" with the valet, who is a member of the U.S. Navy. The valet is the second-known person working on the White House grounds to contract COVID-19. A staffer in Pence's office tested positive back in March.