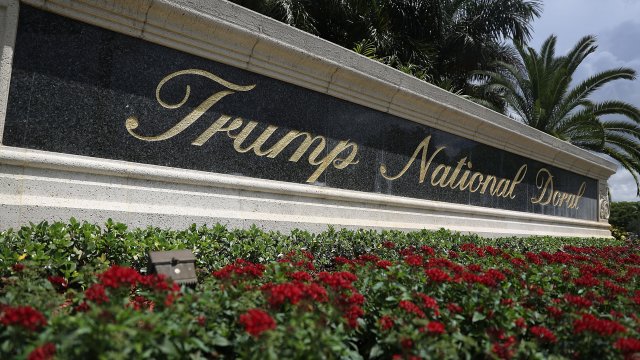 The U.S. is set to host the next G-7 summit. President Trump is pushing one of his properties to host the annual meeting of economic powers.

"It's a great place," President Trump told reporters in France on Monday. "It's that tremendous acreage many hundreds of acres. So we can handle whatever happens. Really. People are really liking it and it's Miami. Doral, Miami. So it's a great area."

The location the president is likely referring to is Trump National Doral, one of his golf resorts in Florida. A Washington Post report discovered the resort's business was down 69 percent over the last two years.

The president added his team looked at 12 sites for next year's summit, but said some of the sites were far away from the airport. He then touted the amenities at his Doral resort.

President Trump claims he will not make money by hosting the G-7 summit. The Trump Organization is no stranger to hosting foreign governments. Chinese President Xi Jinping visited Mr. Trump at Mar-A-Lago in 2017. An NBC News analysis found representatives from at least 22 foreign governments spent money at a Trump property during the president's time in office.

President Trump is involved in an ongoing lawsuit, brought by more than 200 congressional Democrats in 2017. The suit claims he violated the Constitution's Emoluments Clause, which says the U.S. government cannot accept payments or gifts from foreign governments. President Trump has appealed the ruling.

The Trump Organization says it made $191,000 in profits in fiscal year 2018 from foreign governments, adding it donated the profits to the U.S. Treasury.