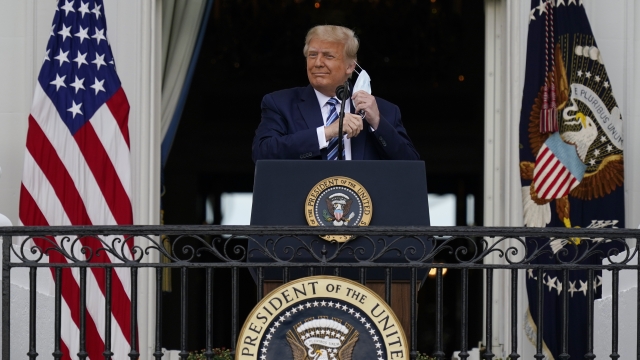 Since President Trump announced his COVID-19 diagnosis to his millions of followers on social media, he’s used his platforms to make dubious claims about the disease, like that it’s less dangerous than the flu.

The president is no stranger to spreading false information on social media, but his approach of providing his own thoughts on COVID-19 have opened the doors to mis-and-disinformaton.

"The president has clearly attempted to shape the public health messaging to fit his theory of the case, rather than going to the scientists at the [Centers for Disease Control and Prevention], at the [National Institutes of Health], understanding the problem, and then shaping his messaging to reflect that science," said Mark Lukasiewicz, Dean of the Lawrence Herbert School of Communication At Hofstra University.

“You have the president saying one thing on Twitter. Then you have the chief of staff of the White House saying something else. You have people throughout the U.S. government saying something completely different. And what that results in is, you know, apart from just chaos, is the rise of conspiracy theory and the rise of dis-and-misinformation,” said Sam Woolley, Program Director of Propaganda Research at the Center for Media Engagement at the University of Texas in Austin.

Even before President Trump’s diagnosis, he was seen as a superspreader of false COVID info — suggesting that most cases are harmless, that children are virtually immune and that the virus would someday just disappear.

Cornell University researchers analyzed 38 million English-language articles about the pandemic, and found President Trump was responsible for more than a third of the "misinformation conversation."

"People like Donald Trump are able to use social media in such a fashion, and then benefit also from the numbers of bots and sock puppets and fake traffic that are there in such a way that they create the illusion of consensus around these ideas that they're bringing up," Woolley said.

Critics say President Trump’s approach has driven a wedge in the public’s understanding about the disease, and whether the president can be trusted.

"The national average of folks who believe that the president's responsible for a great deal of misinformation circulating today is 58 percent. Among young people, 18 to 34, that number is 68 percent," said John Sands, Director of Learning and Impact at the Knight Foundation. "94 percent of Democrats believe that, [compared to] 58 percent of independents and only 11 percent of Republicans.”

There have been calls for social media companies to do more to stop these false information spreads, but their approaches haven’t been uniform. For instance, Twitter recently blocked a claim where Trump said he was immune from COVID. Facebook took no action.

When President Trump’s posts have been blocked, he's reacted by calling for the repeal of section 230 — a law social media companies value because it protects them in how they regulate content. On Wednesday, he reiterated this threat after Twitter and Facebook limited the spread of a New York Post story he tweeted about.

Scientists who work for the Chan Zuckerberg Initiative worry that this lack of action around scientific misinformation could have public health consequences. They sent a letter to Facebook CEO Mark Zuckerberg earlier this year, urging him to adopt stricter rules on misinformation.

"The mission statement of CZI is to better society and find cures for disease," said Jason Shepherd, Associate Professor of Neurobiology and Anatomy at the University of Utah, and a signatory of the letter. "And so it's very frustrating when you see misinformation on Facebook especially relates to COVID, for example, where it really does result in, you know, potentially life or death for people."

Shepherd also said, "There's the fact that now the public is starting to mistrust scientists. And so for us, that's making our job harder and harder, because at some point, for example, we're going to say, hey, we have a vaccine for COVID. And there's already mistrust about this.”

"At some point this is going to be about climate change and various other aspects of society where scientists can contribute to solving those problems," Shepherd said.