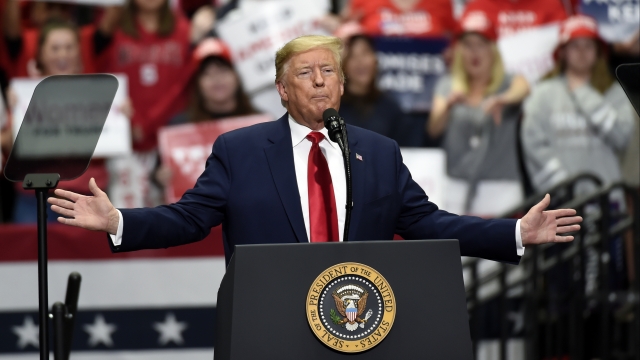 SMS
President Trump Rescheduling Oklahoma Rally Due To Juneteenth
By Bailey Vogt
By Bailey Vogt
June 13, 2020
The rally will now be on June 20th, no longer coinciding with the holiday commemorating the end of slavery in the U.S.
SHOW TRANSCRIPT

President Trump is rescheduling an Oklahoma rally after it coincided with Juneteenth, a holiday commemorating the end of slavery in the U.S.

The campaign event in Tulsa was originally scheduled for June 19th, but Pres. Trump announced it would be moved to the 20th "out of respect" for the holiday.

He tweeted: "Many of my African American friends and supporters have reached out to suggest that we consider changing the date out of respect for this Holiday, and in observance of this important occasion and all that it represents."

Pres. Trump's original rally date — the first rally since the coronavirus pandemic — was met with criticism following weeks of protests over the death of George Floyd, who died in Minneapolis police custody.

Additionally, Tulsa has its own checkered past with race relations. In 1921, a white mob toppled a thriving "Black Wall Street," leading to the destruction of over 1,200 homes and a massacre of as many as 300 people, according to the Tulsa Historical Society and Museum.

For his first rally since March, President Trump's campaign is telling attendees it can't be held liable if people contract the coronavirus. The event will be held indoors at Tulsa's BOK Center arena.