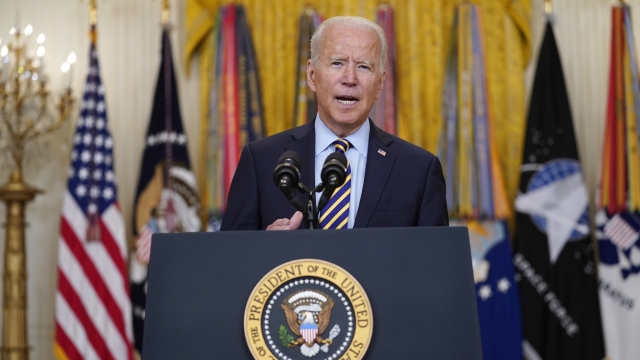 SMS
Pres. Biden: U.S. Military Mission In Afghanistan Ending On August 31
By Jay Strubberg
By Jay Strubberg
July 8, 2021
The president says the Afghan military can hold off the Taliban on its own despite territorial gains made by the group.
SHOW TRANSCRIPT

President Biden says the U.S. military mission in Afghanistan will end on August 31, just days before we marked 20 years since the 9/11 terrorist attacks which triggered America's longest war.

He says the U.S. has accomplished its objectives, but that didn't include nation-building.

The president believes the Afghan military can hold off the Taliban on its own despite territorial gains by the group.

But he says after nearly two decades, there's no choice but for coalition forces to leave.

"2,448 Americans killed," Biden said. "20,722 more wounded an untold thousands coming home with unseen trauma to their mental health. I will not send another generation of Americans to war in Afghanistan with no reasonable expectation of achieving a different outcome."

Meanwhile, there have already been reports of the Taliban retaliating against Afghans who helped the U.S. during the war.

The U.S. is accelerating their visas and starting relocation flights to get them and their families out.