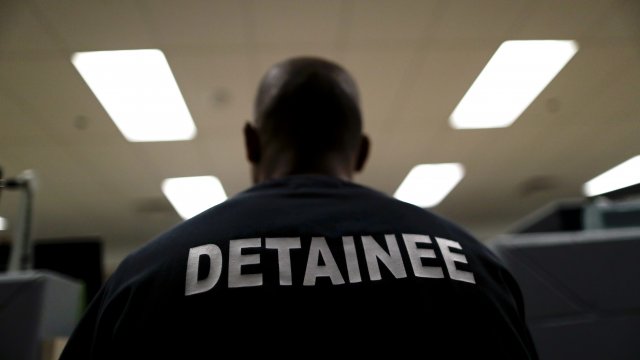 Cuban immigrant Roger Ernesto Lao Muñoz was detained for 8 months during the pandemic while his asylum case played out.

"We were 36 men from different countries in a very small space," Lao Muñoz recalled.

He spent most of his detention time at a private prison near Houston. There, he says he couldn't socially distance, had limited access to soap and health care and was harassed by guards for speaking out.

"We didn't have anything to clean or to scrub. They gave us nothing. So I started to complain and an officer took me out to solitary confinement," he said.

Lao Muñoz was eventually released into the U.S. after winning his case last summer. But around 14,000 immigrants remain in ICE custody — most of them held in privately run facilities where they await decisions on their immigration cases.

President Biden has promised to end the private immigration jail system, arguing that "no business should profit from the suffering of desperate people fleeing violence."

But so far he's been silent on the issue, disappointing advocates.

"One thing that the Biden administration can do immediately is to begin shutting down facilities that are known to be hotbeds of abuse," said Eunice Cho, an attorney at the ACLU's national prison project.

Up until the pandemic, the Trump administration enlarged the detention system at a record pace by detaining more immigrants without criminal convictions — and by opening over 40 new facilities.

But then COVID-19 forced ICE to dramatically step back.

Advocates say this presents the perfect opportunity for President Biden.

"There are empty beds throughout the system. I can't think of a better time for the administration to reverse years and years of misguided efforts to expand the immigration detention system," Cho said.

Immigration hardliners counter that detention facilities, private or not, ensure immigrants show up to their court hearings and protect the public.

"They are detaining the worst of their population. And these are not people that you would want released back onto the street," said Lora Ries, a former Homeland Security official in the Trump administration.

"It simply makes no sense that we detain people who pose no threat to public safety simply based on their immigration status," said John Sandweg, who served as an ICE director in the Obama administration.

Sandweg says ending mandatory detention laws and using alternatives to detention should be as much — if not more — of a priority as ending contracts with private prisons.

"You can deport just as many people. We could just do it a lot cheaper, a lot more humanely and a lot more safely," he said.