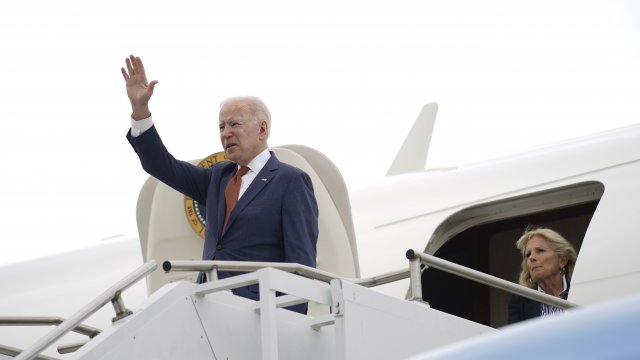 President Joe Biden will use his first overseas trip in office as a chance to restart friendships with European and NATO allies after four years of tense relations under former President Donald Trump.

"The trip, at its core, will advance the fundamental thrust of Joe Biden's foreign policy: to rally the world's democracies to tackle the great challenges of our time," said National Security advisor Jake Sullivan.

The President is scheduled to attend the G7 Summit in Cornwall, England from June 11th to the 13th -- where ending the pandemic, providing assistance for developing nations, and corporate taxes will be at the top of the agenda. After that wraps he and the First Lady will meet with Queen Elizabeth II at Windsor Castle.

On June 14 President Biden will attend a NATO Summit in Brussels, Belgium ---where talks are likely to focus on countering Russia and the ongoing drawdown of forces in Afghanistan.  And the last day of his trip will include a stop in Geneva, Switzerland for a highly anticipated one-on-one meeting with Russian President Vladimir Putin.

The high stakes sit-down with Putin comes amid recent ransomware attacks on U.S. companies by Russia-based criminals and continued political interference in U.S. elections. The White House has consistently said they are working to have a 'stable and predictable' relationship with the Russian leader.

"What he has to do is he has to establish where we are diplomatically, economically and militarily with our allies before he goes in and starts talking to Vladimir Putin," said Todd Belt, who is the director of the political management program at The George Washington University. " I think that really sets the groundwork for what he can do diplomatically, what cards he can play," he added.

As a veteran of the Senate Foreign Relations committee when he was in Congress, now-President Joe Biden is known to some of the world leaders he will be meeting with. But the weeklong trip will be his first face-to-face with many since the start of the pandemic.