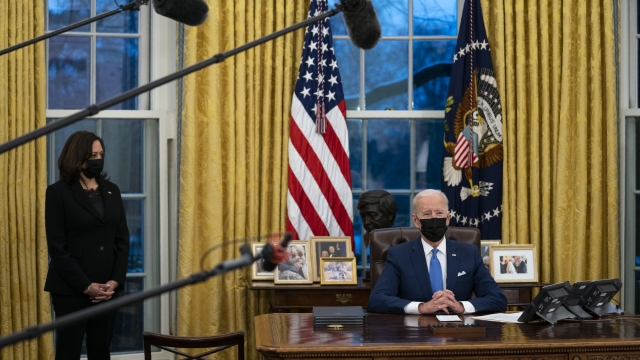 Many of President Biden's campaign promises on immigration have either been blocked in court or abandoned altogether.

Hours after being sworn in, President Biden signed six immigration executive orders promising to change course on his predecessor and vowing, in his words, to restore humanity to the system.

One year later, it’s a mixed bag, especially from the point of view of immigrant activists, like DACA recipient and organizer Juliana Macedo do Nascimento.

“We were full of hope for all the promises that he had made, and now we see that they're not willing to do what it takes to protect us," do Nascimento said.

In March, he was caught flat-footed by a historic surge of migrants — driven in part by the belief that he would welcome them.

Many of his campaign promises have either been blocked in court or abandoned altogether.

As a result, two signature Trump administration asylum policies remain partly in place: the Remain in Mexico program for people seeking asylum in the U.S. and Title 42 — a pandemic order that allows border agents to swiftly expel migrants without screening their asylum claims.

“Now we have to say that they're Biden policies because he hasn't really done enough to get rid of them," do Nascimiento said.

Yet the administration has made many changes, from limiting the number of undocumented immigrants vulnerable to arrest to adding temporary protections for hundreds of thousands of people to raising the refugee cap.

But those changes have mostly flown under the radar, as the president has failed to deliver on his two key promises of rebuilding the asylum system and legalizing millions of undocumented immigrants.

Congress hasn’t helped and is even less likely to do so in an election year.

Republicans say President Biden’s more open approach to immigration has threatened national security and polling shows most Americans disapprove of the way he is handling it.

“We hope what the president understands is that our people are just waiting on him to follow through on his promises and that if he does so, then we will all show up," do Nascimiento said.